"The Tale of Tsaritsa Dinar" is the 16th-century Russian story of Saint Dinar, a Christian queen (Russian: tsaritsa) of Hereti (southeastern Georgia), who is glorified as a pious helmswoman renowned for her wisdom and valor. Composed before 1553, the tale enjoyed a popularity during the second half of the 16th century.
The principal part of the tale focuses on the struggle of Dinar against the king of Persia who demands a tribute from her, and threatens to remove her from the throne in case of noncompliance. The queen meritoriously refuses to comply, replying that the king of Persia cannot usurp the power bestowed upon her by the Lord. In a fiery speech, Dinar encourages her hesitant nobles and, after a pilgrimage to a monastery, marches to meet the Persians. An armored-clad queen, riding a galloping white steed and holding an upraised sword, leads an army into battle, wins a crushing victory, and has the Persian king decapitated.
For years scholars have disputed about the historical figure discussed in great depth in the Russian Church. Many believed that the sources described Holy Queen Tamar (reigned from 1184 to 1213), who presided over the “Golden Age” of medieval Georgia, when her kingdom won a number of victories over the neighboring Muslim states, but the period of Tamar’s rule does not match that of the figure described in the chronicles. The Georgian chronicle "Life of Kartli", however, has preserved information about a certain Dinar, Queen of Hereti, who, along with her son Ishkhanik, converted Hereti to the Orthodox faith and delivered its people from the Monophysite heresy in the 10th century. Queen Dinar’s story resembles that recounted in the Russian Chronicles more closely than any other.
According to the Armenian historian Moses of Kalankaytuk, Slavic tribes that carried out incursions in the southernmost Caucasus often journeyed through the Transcaucasus, and it was with these tribes that the story of Queen Dinar made its way to Russia. The Georgian Church renders great honor to Holy Queen Dinar. As a result of her zealous labors and achievements, a large part of the eastern Transcaucasus was saved from the Monophysite heresy that dominated the region.
Today, on the north wall of the Throne Hall in the Moscow Kremlin, there hangs an image of Holy Queen Dinar mounted on a white horse, victorious over the enemy. 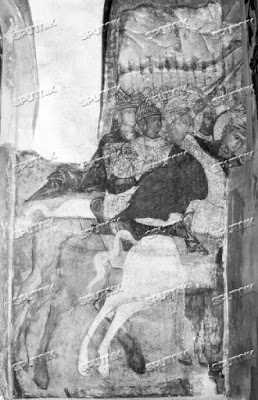