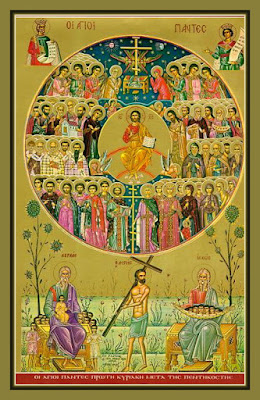 (June 20, 1970)
With the Sunday of All Saints, the moveable cycle of feasts, which began with the Sunday of the Publican and the Pharisee, ends. In the solemn Triodion and the joyful Pentecostarion, the Church presented to us all the work of the divine economy, centered on the great feast of Pascha. We saw the fall of the first-formed and the restoration of our race through the resurrection of Christ. We welcomed the coming of the Paraclete into the world and celebrated the birth of the new people of God, the inauguration and the outpouring of the Holy Spirit "on all flesh." In close connection with this feast is the present feast, the seal and the end of the great festive period. In other words, it comes as a proof of the work of the Church, of the energy of the Holy Spirit in the world. Because it shows us the fruits of that sowing, the reaping of the white lands that the apostles were sent to reap. And as Nikephoros Xanthopoulos very nicely observes in the synaxarion of the day: the most divine Fathers enacted this feast after the descent of the Holy Spirit to show that the presence of the All-Holy Spirit through the apostles succeeded in sanctifying and consolidating the human race and restoring people to the place of the angels through Jesus Christ, either with the offering of the blood of the martyrs, or with their virtuous conduct and behavior. And supernatural work is being done. The Spirit, God, descends, and the dirt, man, ascends. The Word of God raises the incarnate flesh and draws with it those who want to do works of reconciliation with God. Those who were alienated from God before, now unite with God and become His friends. The nations offer their first-fruits, all the Saints.
But a second reason also called for the establishment of this collective feast. Many saints are known and honored with celebrations and festivals by the Church. There are many others, however, in whom the Holy Spirit dwelled and sanctified. They remained unknown and invisible. The Church today honors these unknown saints, who "were citizens in Christ of India and Egypt and Arabia and Mesopotamia and Phrygia, and of the Black Sea; and of all Western Europe and the British Isles, or simply let us just say East and West."
And a third reason is put forward in the synaxarion. All the saints who are honored separately should gather in a common feast, to show in this way that all together they struggled for one Christ, in a common arena, they ran in the arena of Christian virtue, they were servants of one God and from Him they deservedly received the crowns of victory. And so that the common feast is a common impulse to the faithful, who believe in the same Christ and are servants of the same God and struggle like all of them on the track of the arena of their conduct according to Christ. An impulse, but of course a hope that the glory of those in the past will be acquired by today's strugglers and those who today bear the "burden of the day and the heat".1 That this feast will be tomorrow our feast, when the grace of God blesses us to be called to the blessed world of triumph in the heavenly Church. Because with this hope the children of the Church live; that even those who hear today "On this day, the Sunday after Pentecost, the feast of the saints everywhere in Asia, Libya and Europe, North and South, we celebrate" will one day celebrate together with them.

All the friends of my Lord do I hymn.
If any would, let him make mention of them all.

But the feast did not have such a wide range of content at first. It was only a celebration of all the martyrs. Already in the fourth century we have the discourse of the holy Chrysostom at this feast. And the Typikon of Hagia Sophia in Constantinople in the tenth century provides for a synaxis and a panikhida in the Great Church and in the Temple of the Holy Martyrs, which was near the Temple of the Holy Apostles. The feast is titled "All Saints Day", but the synaxarion of the day indicates that the memory of "the holy and right-victorious martyrs throughout the ecumene who have been martyred at various times in the name of our great God and Savior Jesus Christ" is being commemorated. If Xanthopoulos' information is accurate, the feast of All Saints was instituted during the reign of Leo the Wise, when he built a temple and wanted to honor it in the name of his wife Theophano, who pleased "God to the extreme." It was suggested to him, however, that it would not be prudent to assign a temple to a woman, even a saint, who died a short time ago and was not yet given by time "honor and reverence". The emperor was persuaded and entrusted the temple to the honor of "all the saints of the earth everywhere;... saying, 'Even Holy Theophano, who is numbered with all of them.'"
However, even though the beginning of the new feast came with the general content, that is, not only of the martyrs but also of all the saints, its expansion was very successful. Martyrs of Christ are not the only ones who shed their blood for the faith of Christ and thus gave the seal to their faith and testimony. Martyrs are all those who fought the struggle of the Christian life and carried the cross of Christ in this world. Those who were martyred through Christ by the daily torment of conscience. The confessors, who confessed the good confession "before nations and kings".2 The hierarchs, who for their love of God pastored the flock of Christ and supported the right faith. The venerables and the ascetics, who crucified the flesh "with its passions and lusts."3 The people of the world, who lived in the land of temptations and trials, but who "dwelt" as if they were in heaven. And with them the prophets, the righteous, and the forefathers of the Old Testament, who lived according to the law and "testified by faith," waiting for the promise.4 And especially the saint of saints, the Most Holy Virgin and Mother of Christ, the Theotokos Mary.
And while the old hymnography of the feast remains faithful to the original theme, the martyrs, such as in the apolytikion, "Your Church, O Christ our God, clothed itself in the blood of Your martyrs from throughout the world...", and the kontakion, "The world offers You, the author of all creation, as the first-fruits of nature, the God-bearing martyrs...", the newer hymnography extends its commemoration to the whole chorus of the saints.
Three of the finest troparia, the stichera of the praises in the fourth tone, to "Having bravely been martyred", we will quote. This will be followed by the doxastikon of the apostichon of vespers in plagal of the second tone:

Christ the Lord has made wondrous all of His Saints that were on the earth, for as the Apostle declared, they bore His marks and in their flesh shared His sufferings, adorning themselves therewith, and distinguishing themselves in the beauty that is divine. Let us therefore praise and acclaim them as never-fading flowers and as voluntary victims, and as the Church's unerring stars.

Christ the Lord has made wondrous all of His Saints that were on the earth, for as the Apostle declared, they bore His marks and in their flesh shared His sufferings, adorning themselves therewith, and distinguishing themselves in the beauty that is divine. Let us therefore praise and acclaim them as never-fading flowers and as voluntary victims, and as the Church's unerring stars.

With the Prophets, Apostles and the devoutest Monastic Saints, Hieromartyrs, Teachers and every righteous man, the holy women excelling in ascesis and martyrdom, the entire host of Saints and the ranks of the Righteous all be extolled today with divine hymns, for they are the inheritors of heaven's rule and kingdom, and the inhabitants of Paradise.

Come, believers, let us strike up a chorus today; let us reverently celebrate and splendidly honor the glorious and solemn memory of all the Saints; and let us salute them and say, "Rejoice! O glorious Apostles, Prophets, Martyrs, and Hierarchs! Rejoice! O devout Monastics and the Righteous! Rejoice! O host of honorable Women! All Saints, intercede with Christ on behalf of the world, and pray that He enable our leaders to protect us from foreign enemies, and that He grant our souls the great mercy."