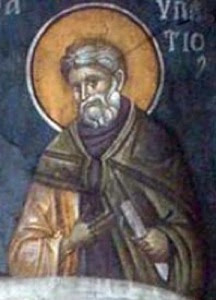 One time, the slaves of the former consul of Rufinianes (located on the Sea of Marmara southeast of Chalcedon) took flight and sought refuge in the monastery of Saint Hypatios (June 17), where they requested not only sanctuary but also admittance into the brotherhood. Hypatios received the runaway slaves and tonsured them as monks. The consul, meanwhile, dispatched men to search for the slaves. One of those sent on horseback was his kinsman upon whom the proconsul bestowed many favors. This kinsman, when he arrived at the monastery, instead of capturing the runaway slaves, he was instead captured by the way of life of the monks in the monastery. He was eventually tonsured a monk, became a distinguished ascetic, and was accounted worthy of the priesthood. As for the slaves, one of them, whose name was Paul, was caught by one of the men of the consul. Paul was subjected to torture and clapped in irons. He was then placed under a soldier's guard. In the middle of the night, an Angel of the Lord released Paul from his chains, bid him to rise, then dismissed him, saying: "Go and save yourself." Once Paul was free of the prison, he, too, went to Hypatios' monastery.
When the consul received intelligence that all his slaves were resorting to Hypatios' monastery and becoming monks, he sent messengers to the Saint, with the message: "Return my slaves immediately!" Hypatios sent his reply to the consul through the messengers: "Tell your master, 'I shall not take them from God and give them to you. If you choose to take them from the Lord, then do it yourself. But let me remind you that they have sought refuge with God.'" This message bewildered the consul, so he sent a priest to Hypatios to persuade him to let the slaves go. This and other such messengers could not persuade Hypatios, so the consul requested a personal meeting with him. Hypatios felt constrained to meet with him. The fathers at the monastery tried to urge him to reconsider: "We beg you, abba, do not go. He has the power to cast you into prison and seize his slaves." Hypatios decided to go ahead with the meeting, which pleased the former consul and pretorian prefect.
That night, the former consul beheld the Saint in a dream offering prayer in his house. Thus, when the Saint arrived, the consul mentioned this attitude of prayer in which he beheld him. But as their conversation moved on to the matter of his slaves, the consul complained with florid and pedantic language, since he was highly educated, and concluded by saying, "I, therefore, request that you return my slaves." Hypatios remarked: "If one views the issue in human terms, then these men are your slaves. But if you do not think in human terms, but rather according to God, then these men are not your slaves, rather they are your fellow slaves. If then you should take them away from God, the Master of all, how will He requite you? By so doing, are you not putting yourself in peril before His wrath?" The consul was astonished at this response. He then entreated Hypatios, saying, "Abba, say a prayer for us. Bless my house and my children. Go forth and pray for us. I shall no longer interfere in their monastic calling." Having done as the former consul requested, Hypatios returned to his monastery.
John at 4:19:00 PM
Share
‹
›
Home
View web version