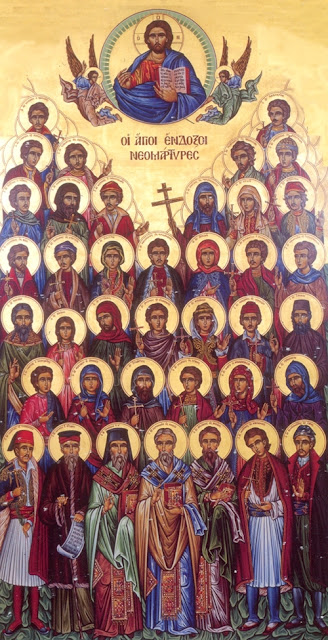 By Archimandrite George Kapsanis,
Abbot of Gregoriou Monastery on Mount Athos
Why did God reveal the holy New Martyrs during the years of the Turkish occupation?

According to the lover of martyrs Saint Nikodemos the Hagiorite, there are five reasons that God allowed to be revealed the holy New Martyrs of modern times. These reasons show the great importance of the confession of the New Martyrs.

First, for the renewal of the entire Orthodox faith.

Modern Christians are assured of the achievements of the old Martyrs through the New Martyrs, which due to disbelief and distance of time had caused them to weaken in their unhesitating faith. Now they see with their own eyes the New Martyrs, who were once their relatives or friends or acquaintances, enduring tortures similar to the old Martyrs without being afraid to "appear again in the world as second Georges, second Demetrios', new Theodores, not only because of the identity of the names, but much more because of the similarity of the martyrdom."

They still renew in the hearts of today's Christians the preaching of the holy Apostles, they make the Gospel convincing and affirm the divinity of Jesus Christ, who is co-equal with His beginningless Father and with his life-giving Spirit, and they preach the great mystery of the Holy Trinity and seal the entire Orthodox faith of Christians, not only with words, "but rather with all the hellish torments they received, with this same blood and martyrdom."

Second, they leave disbelievers without defense on the day of judgment.

What defense will the non-believers give to God who heard the confession of the holy New Martyrs, saw their sacrifice and their love for Christ, saw the signs and miracles that accompanied their martyrdom? The holy New Martyrs "taking pity on the destruction of the non-believers, rushed to martyrdom and preached the truth to them, teaching them to leave the darkness in which they are, and to hasten to the light of Christ's piety and faith, so that they would not be damned in the unquenchable fire of hell." But they, blinded by the lord of darkness of this age and by the passions, could not see and accept the truth of the gospel. That is why the Lord, in his own way, will say to them on the day of judgment: "If I had not spoken to you through these Martyrs of mine, you would have no sin, but now you have no excuse for your sin."

Third, these New Martyrs are a glory as well as a boast of the Eastern Church, and a rebuke on the wicked.

We were shamed by the cacodox Westerners that the Eastern Church did not present a new Saint and Martyr after the schism. The New Martyrs, not only do not lag behind the old ones, but also in a certain point excel "since they had struggled against polytheism and idolatry, which is an obvious impiety, for which it is difficult to deceive a rational mind, yet they struggled against the unbelievers of one-person monotheism, which is a hidden impiety where it can easily deceive the mind."

The Orthodox Church is constantly giving birth to new Saints and Martyrs, because she is united with her Bridegroom, Christ, and has the Holy Spirit as her guide. She gives birth to Saints who please God and whom God glorifies with signs; because she herself is holy and pleasing to God and the treasurer of the divine Grace of the Holy Spirit, therefore her doctrines are also true and orthodox: "As the son is, so is the mother, and as the fruit is, so is the tree, and as the causes are, such is the cause."

Fourth, these New Martyrs are an example of patience for all the Orthodox who are tyrannized under the yoke of captivity.

The sufferings of the enslaved Orthodox were indescribable. The oppression was continuous and unbearable. The conquered looked to Islamization, because it ensured non-Hellenism and Turkism. By resisting the violence of the oppressors and their desire to convert them to Islam, the holy New Martyrs strengthened and set an example for all the Orthodox peoples to endure oppression and not to become Turks.

Every New Martyr is a strong bulwark in the flood of Islamization and Turkism. Without the New Martyrs it is doubtful whether Orthodoxy and Hellenism would have been preserved. Saint Nikodemos goes on to present the holy New Martyrs as speaking to the oppressed Christians: "Our Christian brethren. Our beloved and most-longed for brethren, the people of our Lord Jesus Christ, the chosen and treasured, receive an example of patience in tribulations, where you are tested, from us, your fellow brethren; we, by bravely enduring for Christ the various torments of the unbelievers, we have inherited an Eternal Kingdom, and we were numbered with the ancient and Holy Martyrs, and you, if you endure with thanksgiving, for the name of Christ, the scourges, the prisons, the chains, the slave labors, the damages, the unbearable taxes and the other sufferings of the those who oppress you now, of course, as Martyrs by choice you are considered close to God because, as the Divine Chrysostom says, 'One is not judged by the martyrdom they endure, but by their intent; nor is one after being beheaded as a martyr, does he become a martyr, but from the intention is demonstrated that he is a martyr, even if they do not suffer the martyrdom' (Interpretation of the 127th Psalm)."

Wherever and whenever the opportunity arises, being counted as martyrs, after death you will be numbered with us and dwell in a bright and spacious place, in a place of joy and rest... You are informed by us, brethren, that for another end they do not chastise you with heavy taxes and other things evil, in order to get you bored, lose patience, and deny your faith and accept their special religion; since you, knowing their purpose, beware, our dear brethren, beware, for the love of God and for the salvation of of your souls, lest they rob you of the treasure of your holy faith, of which the whole world, with all its glories and rests and kingdoms, is not worthy."

Fifth and last, these New Martyrs are encouragement and motivation for all other Christians to imitate them through their work, especially those who previously denied Christ.

I think it should be properly emphasized that the holy New Martyrs are the resistance fighters par excellence of the Turkish rule. They resisted not with acts of sabotage against the conquered which would have provoked the reprisals of the barbaric Turks and cost the lives of thousands of innocent victims, but with the brave public confession and control they exercised against the conquerors, resulting in the anger of the conqueror to break out against them and not among the rest of the people. We could also say that the anger of the conqueror towards the Orthodox people found the holy New Martyrs as its expiation victims and thus the people were saved. This is what happened with the Hieromartyr Saint Gregory V, who with his martyrdom appeased the ferocious fury of the indignant Turks, officials and the mob, who were outraged by the start of the Uprising, and saved the Greeks of the City from the planned mass genocide.

When the occasional leaders of our country hear the heartbeat of our people, like Makrygiannis and Father Kosmas, when they feel the authenticity, truth, humanity and populism of Orthodoxy, and its unbreakable bond with our suffering and martyred Nation, when they stop reading our history with atheistic, idealistic or Marxist glasses, then they will feel the need to honor the holy New Martyrs as the first and leading resistance fighters of Modern Hellenism, as the vanguard of the fighters of the 1821 uprising, as the nightingales of our national independence.

Then our rulers will feel the need to honor not only the last national resistance, but much more the spiritual resistance of the Holy New Martyrs and other unknown Orthodox confessors, to whom we owe our faith and our Hellenism.

They will also feel the need to offer our schools as basic reading the lives of the New Martyrs and the teachings of Father Kosmas, as well as the memoirs of Makrygiannis, complete and without edits.

When and which of our political leaders will be so bold and so groundbreaking to proceed with such reforms that will free our education from the Babylonian captivity of atheism and materialism and return it to our original Greek Orthodox roots?

Until then, let the Church continue its ethnic mission and tell our people the truth about its history and the spiritual founders of its freedom.

Source: Excerpt from a homily delivered on the Third Sunday of Matthew in 1986 in the Church of Saint Demetrios in Thessaloniki. Translated by John Sanidopoulos.
John at 5:21:00 PM
Share
‹
›
Home
View web version