Why the Holy Spirit Descended as a Dove Upon Christ 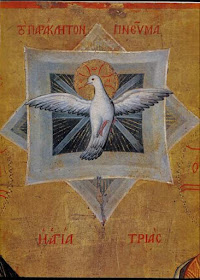 By St. Cyril of Jerusalem
(Catechetical Lecture 17.9-10)
This Holy Spirit came down when the Lord was baptized, that the dignity of Him who was baptized might not be hidden; as John says, "But He which sent me to baptize with water, the same said to me, Upon whomsoever you shall see the Spirit descending and remaining upon Him, the same is He which baptizes with the Holy Spirit" (John. 1:33). But see what says the Gospel: "the heavens were opened;" they were opened because of the dignity of Him who descended; for, "lo," he says, "the heavens were opened, and he saw the Spirit of God descending as a dove, and lighting upon Him" (Matthew 3:16); that is, with voluntary motion in His descent. For it was fit, as some have interpreted, that the primacy and first-fruits of the Holy Spirit promised to the baptized should be conferred upon the manhood of the Savior, who is the giver of such grace. But perhaps He came down in the form of a dove, as some say, to exhibit a figure of that dove who is pure and innocent and undefiled, and also helps the prayers for the children she has begotten, and for forgiveness of sins; even as it was emblematically foretold that Christ should be thus manifested in the appearance of His eyes; for in the Canticles she cries concerning the Bridegroom, and says, "Your eyes are as doves by the rivers of water" (Song of Songs 5:12).
Of this dove, the dove of Noah, according to some, was in part a figure. For as in his time by means of wood and of water there came salvation to themselves, and the beginning of a new generation, and the dove returned to him towards evening with an olive branch; thus, say they, the Holy Spirit also descended upon the true Noah, the Author of the second birth, who draws together into one the wills of all nations, of whom the various dispositions of the animals in the ark were a figure. Him at whose coming the spiritual wolves feed with the lambs, in whose Church the calf, and the lion, and the ox, feed in the same pasture, as we behold to this day the rulers of the world guided and taught by Churchmen. The spiritual dove therefore, as some interpret, came down at the season of His baptism, that He might show that it is He who by the wood of the Cross saves them who believe, He who at eventide should grant salvation through His death.