John the Baptist, the Greatest Among Servants and Prophets But Not the Master and Lord 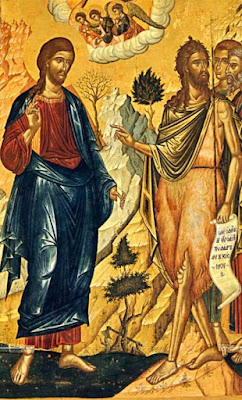 By St. Cyril of Jerusalem
Baptism is the end of the Old Testament, and beginning of the New. For its author was John, than whom was none greater among them that are born of women. The end he was of the Prophets, for all the Prophets and the law were until John [cf. Matt. 11:13], but of the Gospel history he was the first-fruit. For it says, "The beginning of the Gospel of Jesus Christ ... John came baptizing in the wilderness."
You may mention Elijah the Tishbite who was taken up into heaven, yet he is not greater than John.
Enoch was translated, but he is not greater than John.
Moses was a very great lawgiver, and all the Prophets were admirable, but not greater than John.
It is not I that dare to compare Prophets with Prophets, but their Master and ours, the Lord Jesus, declared it: "Among them that are born of women there has not risen a greater than John" [Matt. 11:11]. He says not "among them that are born of virgins," but of women.
The comparison is between the great servant and his fellow-servants, but the pre-eminence and the grace of the Son is beyond comparison with servants.
Do you see how great a man God chose as the first minister of this grace? A man possessing nothing, and a lover of the desert, yet no hater of mankind. Who ate locusts, and winged his soul for heaven, feeding upon honey, and speaking things both sweeter and more salutary than honey, clothed with a garment of camel's hair, and showing in himself the pattern of the ascetic life; who also was sanctified by the Holy Spirit while yet he was carried in his mother's womb. Jeremiah was sanctified, but did not prophesy in the womb [cf. Jer. 1:5]. John alone while carried in the womb leaped for joy [cf. Lk. 1:44], and though he saw not with the eyes of flesh, knew his Master by the Spirit: for since the grace of Baptism was great, it required greatness in its founder also....
For why should I speak any more of man? John was great, but what is he to the Lord? His was a loud-sounding voice, but what in comparison with the Word? Very noble was the herald, but what in comparison with the King? Noble was he that baptized with water, but what to Him that baptizes with the Holy Spirit and with fire [cf. Matt. 3:11]? The Savior baptized the Apostles with the Holy Spirit and with fire, when "suddenly there came a sound from heaven as of the rushing of a mighty wind, and it filled all the house where they were sitting. And there appeared unto them cloven tongues like as of fire, and it sat upon each one of them, and they were all filled with the Holy Spirit" [Acts 2:2].
Catechetical Lecture 3
John at 11:23:00 AM
Share
‹
›
Home
View web version