Venerable Varlaam (Barlaam), who in the world was called Vasily (Basil), lived during the reign of Tsar Ivan the Terrible (1533-1584). He was born around 1505 in the village of Keret on the shores of the White Sea, most likely from a family of simple Pomors. We are told he was taught to read books, which was rare in those days.
Around 1535 Vasily married and was first ordained a deacon, then a priest, and served in the Church of Saint Nicholas in Kola. When Saint Theodore of Kola established the Holy Trinity Monastery in Kola, Vasily was transferred to the Church of Saint George in Keret in 1540.
It is said that while Father Vasily was serving as a priest in Kola, he expelled a demon that was harming the fishermen of the cape there. The mighty spirit was especially dangerous, which from time immemorial lived at the ancient pagan temple on the cliff of Abram-cape, which blocks the exit from the Kola Bay. That unclean spirit demanded sacrifices from everyone leaving for fishing in the sea. Out of fear the fishermen would make their offerings by donation. The demon in return for being expelled by Father Vasily threatened to take revenge on the priest. Demonic revenge seemed to have taken place when Father Vasily and his wife moved back home to Keret. There a tragedy took place that would forever alter his life. 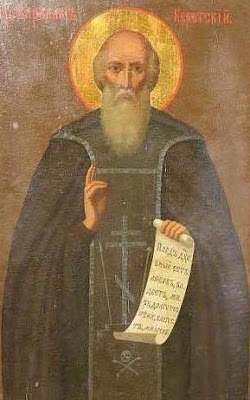 While we have no reliable information that gives us the details, what we do know is that in Keret Father Vasily killed his wife. One theory says that he suspected her of adultery and killed her in a fit of jealousy. A 20th century song has her singing: "I’m afraid of priestly clothes, I don’t like your beard. I fell in love with a young man...." Another theory says the wife became demon possessed, causing him shame and brought about the spread of rumors, so in an effort to expel the demon he was deceived by the demon and mortally wounded his wife.
After murdering his wife, Father Vasily buried her and went to Kola to confess his sin with abundant tears before Saint Theodore. This is when Saint Theodore gave Father Vasily an unusual and incredibly heavy penance. He was to carry the coffin with his wife's body in a boat until it was decomposed and reduced to dust, sailing from Keret to Kola then back again. He was also told to keep a strict fast and only once a year on Easter was fish allowed to be eaten. It is believed that this penance was not only for Father Vasily, but for the soul of his wife as well, since she would have to suffer with him throughout the ordeal, with her soul by her body. 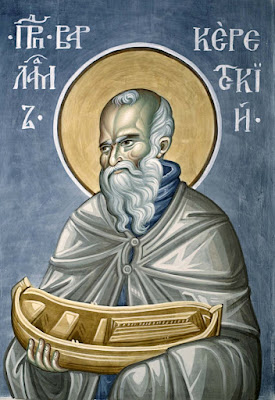 Father Vasily therefore returned to Keret, dug up the coffin of his wife, and for three years sailed the stormy sea, while constantly singing the Psalms of David. Bad weather accompanied him almost every day throughout his three-year penitential voyage. Six times a year he would go from Keret to Kola and six times from Kola to Keret. Twelve times a year or, in other words, every month Varlaam defeated a thousand land kilometers or five hundred and forty nautical miles. Eighteen miles or thirty-three kilometers every day on oars, at all times of the year, in any weather, and always against the wind.
The fast that Varlaam endured during his ordeal consisted of "dry-eating." And only once a year, for Easter, he went to Kola, to the pier of the Holy Trinity Monastery, and Varlaam was able to receive communion with the Theophany water and could eat fish.
In the third year of his voyage, an abundance of sea mollusks caused the death of many ships. Father Vasily prayed to God, sprinkled Holy Water on the mollusks, and expelled them. This was taken as a sign that God had forgiven him. (Today there are no mollusks in this part of the sea, but scientists do have evidence that they were once there). A sign of his ordeal for the rest of his life was that he was now a hunchback. 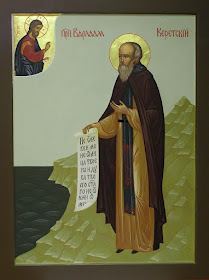 After Father Vasily buried his wife a second time, he was tonsured a monk and took the name Varlaam. This probably took place at the Pechenga Monastery by Hieromonk Jonah in 1548. He went there with the blessing of Saint Theodore. After some time, Hieromonk Varlaam returned to his homeland and settled at the mouth of the Keret River, and after a while he moved away from the inhabited places, to one of the islands of the Chupsky Bay.
At this time Hieromonk Varlaam gained the gift of healing, though out of humility he avoided receiving glory from people. It was here that he reposed around 1589 or 1590 on November 6th. A poor peasant found his body and transferred it to the village of Keret, where he buried it.
During his life, Saint Varlaam was known as a wonderworker who especially was noted for his miracles at sea. After his death he became revered in Russia as a patron for those who traveled by sea just as much as Saint Nicholas of Myra. 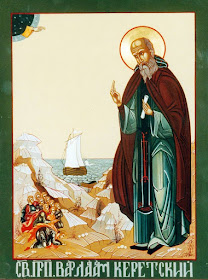 On January 15, 1722 the incorrupt relics of Saint Varlaam were found in the Chapel of Saint George. His relics remained in Keret until 1961, when they disappeared without a trace.
Saint Varlaam did not appear in the calendars of the Church until 1903, though before this he was venerated locally.
In 2000, on the Terek coast of the White Sea, in the historical and ethnographic complex “Tonya Tetrina”, the Chapel of Saint Varlaam of Keretsky was erected and consecrated. 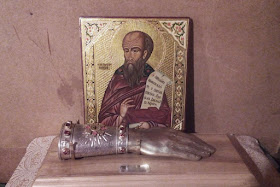 On June 7, 2001, in the city of Kola, a cemetery church was consecrated in honor of the Saint, located on the site of the former Holy Trinity Monastery in Kola.
In 2002, the Church of Saint Varlaam of Keretsky was built in the village of Chupa, though it burned down in May 2010.
In 2014, the parish in the city of Ostrovnoy was given the name of the Venerable Varlaam, at the same time the cross in the Lopskoye Bay on Svyatoy Nos was restored at the site of the “miracle of the expelling of the sea mollusks” (a chapel is planned to be erected here).
On January 28, 2015, in the village of Louhi, the relics of the Venerable Varlaam of Keret were found.