"On the Character of Men and On the Virtuous Life": 170 Texts (St. Anthony the Great) 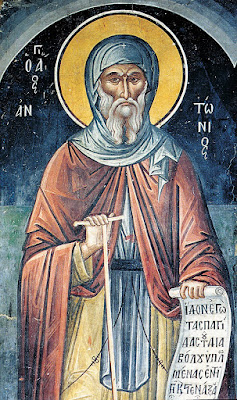 The first of the five volumes of the Philokalia of Sts. Nikodemos the Hagiorite and Makarios of Corinth begins with 170 texts attributed to St. Anthony the Great, titled "On the Character of Men and On the Virtuous Life." Unfortunately, in the English translation of Kallistos Ware, G.E.H. Palmer, Philip Sherrard this work is relegated to the Appendix, due to the belief that it is not an authentic work of St. Anthony. Whether or not it is an authentic work of St. Anthony, there is a purpose for it being the first work of the Philokalia that the aforementioned translators didn't seem to understand, thus tainting the publication. Dumitru Staniloae, in his Romanian translation of the Philokalia, defends the authorship of St. Anthony the Great of this work and places it in its right place (even though he changes the order of other authors), as did Dr. Constantine Cavarnos in his English translation of the Philokalia. Fr. Staniloae makes references to the studies of F. Klejan, M. Viller and K. Rahner, but he ignores I. Hausherr's article in 1933 [Irénée Hausherr, “Un écrit stöicien sous le nom de Saint Antoine Eremite”, Orientalia Cristiana 30 (1933) 212-216.] which sets to prove that Anthony is not the author of this work but that it has Stoic origins. Dr. Cavarnos includes footnotes in his translation showing the comparisons and similarities between this work and the letters attributed to St. Anthony.