Miracles of Saint George of Ioannina 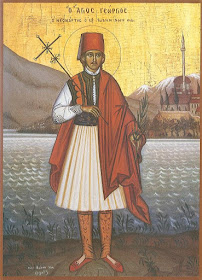 Though a Divine Office was composed for Saint George of Ioannina a year after his martyrdom in 1838, the hymnographer of the Great Church of Christ, Hieromonk Gerasimos Mikragiannanitis of blessed memory, composed the most widely distributed Divine Office to the Saint, as well as a follow up Divine Office to commemorate the translation of his relics on 26 October 1971, at the initiative of Metropolitan Seraphim of Ioannina (later Archbishop of Athens and All Greece). Father Gerasimos greatly revered the Holy New Martyr George and considered him the patron of the Hut of the Dormition of the Theotokos at the Skete of Little Saint Anna on Mount Athos.
Often times with his insightful eyes he would watch the Saint roam over those rocky arid parts with his martyric cloak blowing in the wind.
After all, as a young child, in Dhrovjan of Northern Epirus where he grew up, he had heard stories of St. George of the Kilt, of his martyrdom, of the lamentation that spread over the lake in Ioannina when he was hanged. The old villagers recalled how this lamentation spread throughout the villages at the time.
When he later became a monk at Mount Athos, he often invoked the help of St. George of Ioannina. Metropolitan Seraphim had even gifted him a portion of the relic of St. George, before which he often knelt and prayed. This relic was continuously fragrant, which was evidence of the lingering presence of St. George in the hut.
Father Gerasimos had a fresco commissioned of St. George for outside the church of the hut exactly as he had seen him, depicted covering their home with his cloak and protecting the brotherhood from temptations.
This is why every year on January 17th the brotherhood held a special festival in honor of St. George, with many monks from the surrounding area.
Many are the miracles of the Holy New Martyr George on behalf of the brotherhood. Below is just one example:
Those of old would relate how one day they were applying concrete to the foundation of a cell and there weren't enough materials to complete the job, and all their hard work would have been lost. And there was no possibility of getting supplies then, because only animals could carry them along those rough places, just as it is still done today. Because of this difficulty, the fathers resorted to St. George the New Martyr right away, whom they called upon with one voice.
Suddenly they all heard a noise coming from the church, and it sounded like the silver reliquary on the altar opened forcefully. They then took it and processed it to the concrete slab they were fixing.
When this was done, the materials to complete the job arrived, with a surplus, and so they were able to complete the job, and had some material left over.
We will also relate another miracle of the Saint from the 20th century, which we read about in the book The Shortest Path by author Alexandros Kosmatopoulos who was from Thessaloniki. A priest in Melissochorian told him the following in the 1980's, as Kosmatopoulos writes:
"Papa-Dimitri (Boudoukas), the parish priest in Melissochorian, when he was a child lost his sight, but it returned to him after he spent the night in the Chapel of Saint George the New outside the village of Agios Panteleimon....
Because the men did not respond to the call of the National Defense, authorities seized the women and locked them in dungeons in Thessaloniki to force them to appear.
In the darkness of the prison where they stayed for a week, the child's eyes suffered and it was impossible for him to bear the slightest ray of light without terrible pain.
They turned to many doctors without results.
Finally his grandmother decided for them to sleep after Paraklesis in the Chapel of Saint George the New, which was built by a fellow villager of theirs after he was commanded to do so by the Saint one day as he was returning riding his animal to his village.
He had half-fallen asleep when there suddenly appeared in front of him the New Martyr George of Tzourchles in Grevenon, who was martyred in Ioannina, and he asked him to build him a house in that area.
The grandmother with the mother of the child and the child locked themselves in the chapel that night, and as they slept they heard footsteps from a tsarouchi on the stones, and the locked door opened widely on its own.
The Saint then entered wearing a kilt, he blessed them, then disappeared.
In the morning the child could see clearly without the slightest discomfort."