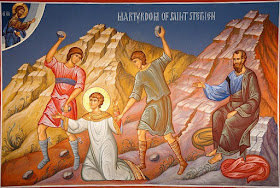 In the late fourth century, the liturgical calendar of feasts looked somewhat differently than it appears today. Christmas was a new feast in many places in the East, with some places celebrating it on December 25th while others continued celebrating it on January 6th. Like many regions of the time, Cappadocia had its own liturgical calendar, which had many similarities to other calendars of the time, though there were slight differences as well. What characterizes just about all of them is that they were trying to establish a certain order and hierarchy. Thus in Cappadocia, the beginning of the liturgical year in 380 was the Nativity of the Lord on December 25th, since this was the "holy of holies and feast of feasts" upon which all other feasts were established. Then followed commemorations of the apostles and prophets, beginning with the Protomartyr Stephen, followed by Peter, Paul and John, then James. This was followed until January 1st when the Shepherds and Teachers began to be commemorated, beginning with the recently reposed Saint Basil the Great.
In his Funeral Oration to Basil the Great, Gregory of Nyssa begins by explaining this order:
"In a wonderful manner God has established an order [taxis] and sequence [akolouthia] by the feasts we commemorate each year. For example, today we have already celebrated a feast and will mark this same observance at a later time. Our order of spiritual feasts which the great Paul has taught consists in having a knowledge of heavenly reality [cf. 1Cor 12.28, Eph 4.11]. He says that at the beginning the Apostles enjoyed an order which formed prophets together with shepherds and teachers. The order of yearly celebrations concurs with this apostolic sequence. However, the first [order] does not concur with the others because the Only-Begotten Son's theophany through his birth from a virgin is instituted in the world not simply as a holy feast but as the holy of holies and feast of feasts. Therefore let us number those who follow this order which for us begins with the assembly of apostles and prophets. Indeed people like Stephen, Peter, James, John and Paul possess the apostolic and prophetic spirit after whom comes the pastor and teacher [Basil] who belongs to their order which marks our present celebration. What, then, is this festival? Shall I speak of the name or the grace which suffices to reveal the man instead of the name? You know that there is a teacher and shepherd among the Apostles and comprehend the meaning of such titles. I am speaking about Basil."
And in his Encomium to the Protomartyr Stephen, Asterius of Amasea writes:
"Don't be displeased, Peter, don't be irritated, James, nor discontented, John, if I not only compare the man with your love of wisdom, but even if I want to assign him something more. Rather rejoice, as fathers without jealousy, able to glory in the successes of their sons, gladly overcome by their children with regard to virtue. If indeed there is something noble and great about Stephen, it is completely yours, as you are his educators and leaders into the mysteries."
From the homilies of Gregory of Nyssa and Asterius of Amasea and the calendars of the time, we can thus reconstruct the Post-Nativity calendar for the first three days after Christmas in Cappadocia:
December 26 - Saint Stephen the Protomartyr
December 27 - Saints Peter, Paul and John
December 28 - Saint James
In other places at the time, you may have had Peter and Paul together either on the 27th or 28th, and you would have had James and John together either on the 27th or 28th. Whatever the order was at the time, it always began with Stephen, then grouped the other four in various ways. But in Cappadocia, Stephen was seen as the first and greatest of the martyrs, after whom were John the Baptist (or Theologian), Peter and Paul the preeminent apostles, and James who was killed by Herod (or the brother of the Lord and first bishop of Jerusalem).