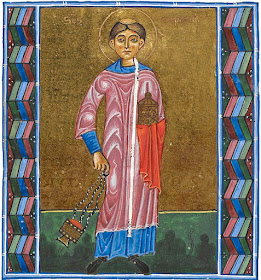 December 27th
Epistle Reading
Prokeimenon. Mode Plagal 4.
Psalm 18.4,1
Their voice has gone out into all the earth.
Verse: The heavens declare the glory of God.
Acts of the Apostles 6:8-15; 7:1-5, 47-60
English
In those days, Stephen, full of grace and power, did great wonders and signs among the people. Then some of those who belonged to the synagogue of the Freedmen (as it was called), and of the Cyrenians, and of the Alexandrians, and of those from Cilicia and Asia, arose and disputed with Stephen. But they could not withstand the wisdom and the Spirit with which he spoke. Then they secretly instigated men, who said, "We have heard him speak blasphemous words against Moses and God." And they stirred up the people and the elders and the scribes, and they came upon him and seized him and brought him before the council, and set up false witnesses who said, "This man never ceases to speak words against this holy place and the law; for we have heard him say that this Jesus of Nazareth will destroy this place, and will change the customs which Moses delivered to us." And gazing at him, all who sat in the council saw that his face was like the face of an angel. And the high priest said, "Is this so?" And Stephen said: "Brethren and fathers, hear me. The God of glory appeared to our father Abraham, when he was in Mesopotamia, before he lived in Haran, and said to him, 'Depart from your land and from your kindred and go into the land which I will show you.' Then he departed from the land of the Chaldeans, and lived in Haran. And after his father died, God removed him from there into this land in which you are now living; yet he gave him no inheritance in it, not even a foot's length, but promised to give it to him in possession and to his posterity after him, though he had no child. "But it was Solomon who built a house for him. Yet the Most High does not dwell in houses made with hands; as the prophet says, 'Heaven is my throne, and earth my footstool. What house will you build for me, says the Lord, or what is the place of my rest? Did not my hand make all these things?' "You stiff-necked people, uncircumcised in heart and ears, you always resist the Holy Spirit. As your fathers did, so do you. Which of the prophets did not your fathers persecute? And they killed those who announced beforehand the coming of the Righteous One, whom you have now betrayed and murdered, you who received the law as delivered by angels and did not keep it." Now when they heard these things they were enraged, and they ground their teeth against him. But he, full of the Holy Spirit, gazed into heaven and saw the glory of God, and Jesus standing at the right hand of God; and he said, "Behold, I see the heavens opened, and the Son of man standing at the right hand of God." But they cried out with a loud voice and stopped their ears and rushed together upon him. Then they cast him out of the city and stoned him; and the witnesses laid down their garments at the feet of a young man named Saul. And as they were stoning Stephen, he prayed, "Lord Jesus, receive my spirit." And he knelt down and cried with a loud voice, "Lord, do not hold this sin against them." And when he had said this, he fell asleep.
Προκείμενον. Ήχος πλ. δ'.
ΨΑΛΜΟΙ 18.4,1
Εἰς πᾶσαν τὴν γῆν ἐξῆλθεν ὁ φθόγγος αὐτῶν.
Στίχ. Οἱ οὐρανοὶ διηγοῦνται δόξαν Θεοῦ.
Πράξεις Ἀποστόλων 6:8-15, 7:1-5, 47-60 τὸ ἀνάγνωσμα


Gospel Reading
Gospel According to Matthew 21:33-42
English
The Lord said this parable, "There was a householder who planted a vineyard, and set a hedge around it, and dug a wine press in it, and built a tower, and let it out to tenants, and went into another country. When the season of fruit drew near, he sent his servants to the tenants, to get his fruit; and the tenants took his servants and beat one, killed another, and stoned another. Again he sent other servants, more than the first; and they did the same to them. Afterward he sent his son to them, saying 'They will respect my son.' But when the tenants saw the son, they said to themselves, 'This is the heir; come, let us kill him and have his inheritance.' And they took him and cast him out of the vineyard and killed him. When therefore the owner of the vineyard comes, what will he do to those tenants?" They said to him, "He will put those wretches to a miserable death, and let out the vineyard to other tenants who will give him the fruits in their seasons." Jesus said to them, "Have you never read in the scriptures: 'The very stone which the builders rejected has become the head of the corner; this was the Lord's doing, and it is marvelous in our eyes?'"
Greek
Εἶπεν ὁ Κύριος τήν παραβολὴν ταύτην· ῎Αλλην παραβολὴν ἀκούσατε. ἄνθρωπός τις ἦν οἰκοδεσπότης, ὅστις ἐφύτευσεν ἀμπελῶνα καὶ φραγμὸν αὐτῷ περιέθηκε καὶ ὤρυξεν ἐν αὐτῷ ληνὸν καὶ ᾠκοδόμησε πύργον, καὶ ἐξέδοτο αὐτὸν γεωργοῖς καὶ ἀπεδήμησεν. ὅτε δὲ ἤγγισεν ὁ καιρὸς τῶν καρπῶν, ἀπέστειλε τοὺς δούλους αὐτοῦ πρὸς τοὺς γεωργοὺς λαβεῖν τοὺς καρποὺς αὐτοῦ. καὶ λαβόντες οἱ γεωργοὶ τοὺς δούλους αὐτοῦ ὃν μὲν ἔδειραν, ὃν δὲ ἀπέκτειναν, ὃν δὲ ἐλιθοβόλησαν. πάλιν ἀπέστειλεν ἄλλους δούλους πλείονας τῶν πρώτων, καὶ ἐποίησαν αὐτοῖς ὡσαύτως. ὕστερον δὲ ἀπέστειλε πρὸς αὐτοὺς τὸν υἱὸν αὐτοῦ λέγων· ἐντραπήσονται τὸν υἱόν μου. οἱ δὲ γεωργοὶ ἰδόντες τὸν υἱὸν εἶπον ἐν ἑαυτοῖς· οὗτός ἐστιν ὁ κληρονόμος· δεῦτε ἀποκτείνωμεν αὐτὸν καὶ κατάσχωμεν τὴν κληρονομίαν αὐτοῦ. καὶ λαβόντες αὐτὸν ἐξέβαλον ἔξω τοῦ ἀμπελῶνος, καὶ ἀπέκτειναν. ὅταν οὖν ἔλθῃ ὁ κύριος τοῦ ἀμπελῶνος, τί ποιήσει τοῖς γεωργοῖς ἐκείνοις; λέγουσιν αὐτῷ· κακοὺς κακῶς ἀπολέσει αὐτούς, καὶ τὸν ἀμπελῶνα ἐκδώσεται ἄλλοις γεωργοῖς, οἵτινες ἀποδώσουσιν αὐτῷ τοὺς καρποὺς ἐν τοῖς καιροῖς αὐτῶν. λέγει αὐτοῖς ὁ ᾿Ιησοῦς· οὐδέποτε ἀνέγνωτε ἐν ταῖς γραφαῖς, λίθον ὃν ἀπεδοκίμασαν οἱ οἰκοδομοῦντες, οὗτος ἐγενήθη εἰς κεφαλὴν γωνίας· παρὰ Κυρίου ἐγένετο αὕτη, καὶ ἔστι θαυμαστὴ ἐν ὀφθαλμοῖς ἡμῶν;