The Incarnation of God: The Cause of Man's Deification (Archimandrite George Kapsanis) 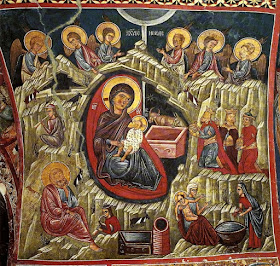 The Incarnation of God: The Cause of Man's Deification
By Archimandrite George Kapsanis
The Church Fathers say that God became man in order to make man a god. Man would not be able to attain deification (gr. theosis) if God had not become incarnate.
In the years before Christ, many wise and virtuous people had appeared. For example, the ancient Greeks had reached quite high standards of philosophy about the good and about God. Their philosophy, in fact, contained seeds of the truth, the so-called ‘spermaticos logos’. They were very religious people, after all; they were not at all atheist, as some of our contemporaries are trying to present them, who do not know the facts well. But of course they did not know the true God; they were idolaters, yet very pious and god-fearing people. For this reason, by attempting to remove its faith in God from the psyche of our devout people, even without their consent, educators, teachers, politicians and civil governors act in a way inconsistent to the memory of the Greek nation, and so they commit "hubris" (gr. hybris) in the ancient meaning of the word. In essence, they attempt its de-hellenization, because the Tradition of the Greeks, throughout our ancient, recent and modern history, is a Tradition of piety and respect for God, on which all the worldwide cultural contribution of Hellenism was and is based.
In the philosophy of the ancient Greeks we discern a certain yearning for the unknown God; a yearning for the experience of God. They were faithful and pious, but they did not have the correct and completed knowledge of God; Communion with God was lacking. Deification (gr. theosis) was not possible for them.
In the Old Testament, we also find just and virtuous people. But the full union with God, Theosis, becomes possible, is attained, with the incarnation of the Divine Logos.
This is the purpose of the incarnation of God. If the purpose of man's life was simply to become morally better, there would be no need for Christ to come into the world, for all these events of divine Providence to take place; for the incarnation of God; the cross, the death and resurrection of the Lord; all that we Christians believe (gr. pistis) to have happened by Christ. The human race could have been taught to become morally better by the prophets, the philosophers, the righteous men and teachers, just as well.
We know that Adam and Eve were beguiled by the devil and wanted to become gods, but not in collaboration with God; not through humility, obedience, or love; but relying on their own power, their own will, egotistically and autonomously. That is to say that the essence of the fall is egotism. Thus, by adopting egotism and self-reliance, they separated themselves from God, and instead of attaining deification (gr. theosis), they attained exactly the opposite: spiritual death.
As the Church Fathers say, God is life. So, whoever is separated from God is separated from life. Therefore, death and spiritual mortification are the outcome of the disobedience of the first-created.
We all know the consequences of the fall. Separation from God cast man into a carnal, bestial and demonic life. The brilliant creation of God fell seriously ill, almost to death. What had been made ‘in His image’ was sullied. Since the fall, man no longer has the preconditions for proceeding to deification (gr. theosis), as he had before he sinned. In this situation of grave illness, almost dead, he can no longer re-orient himself towards God. Thus there is a need for a new root for humanity; a need for a new man, who will be healthy and able to redirect the freedom of man towards God.
This new root, the new man, is the God-man, Jesus Christ, the Son and Logos of God, who incarnates to become the new root, the new beginning, the new leaven of humanity.
As St. Gregory Nazianzen, the Theologian, says in his theological writings, with the incarnation of the Logos a second communion between God and humanity is realized. The first such communion was in Paradise. This, however, was broken. Man was separated from God. The all-good God then provided for another, a second communion, which can no longer be severed, that is, a union of God and men. Because this, the second communion of God and men happens in the person of Christ.
The God-man Christ, the Son and Logos of God the Father, has two perfect natures: divine and human. These two perfect natures are joined ‘without change, without confusion, without separation, and without division’ in the one person of Christ, according to the famous definition of the Fourth Holy Ecumenical Council at Chalcedon, which, in summary, constitutes the theological armor of our Orthodox Church, given under the guidance of the Holy Spirit, against Christological heresies of all kinds throughout all ages. Thus, we have one Christ with two natures, divine and human.
Now then, by means of the union of the two natures in the person of Christ, human nature is irrevocably united with divine nature. Because Christ is the eternal God-man. As the God-man, He ascended to heaven. As the God-man, He sits on the right hand of the Father. As the God-man, He will come to judge the world at the Second Coming. Therefore, human nature is now enthroned in the bosom of the Holy Trinity. No longer can anything cut off human nature from God. So, now, after the incarnation of the Lord – no matter how much we as men sin, no matter how much we detach ourselves from God – if, through repentance, we wish to unite again with God, we can succeed. We can unite with Him and so become gods by Grace.
John at 11:08:00 AM
Share
‹
›
Home
View web version