On the Incarnation of the Word (St. Symeon the New Theologian) 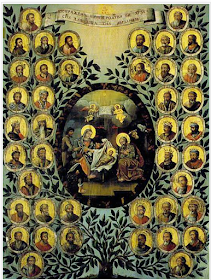 By St. Symeon the New Theologian
The Way in Which the Word Became Flesh
At the creation of our foremother Eve, God took the animate rib from Adam’s side and formed it into a woman. This is why He didn’t breathe into her, as He had done with Adam, but instead, the flesh that had been taken was made into the whole body of a woman. And the first-fruit of the spirit, which was taken at the same time as the animate flesh, was perfected into a living soul, so that another person was made from these two parts together. In precisely the same way, God the Creator and Maker took flesh from the holy Mother of God and Ever-Virgin Mary, as if from a small piece of leavened dough- that is, from the soul and body together- and united it with His own unapproachable and incomprehensible Divinity. Or rather, He really did unite the whole of the Person of His divinity with our own nature, He compounded it separately with that nature and made it a holy temple to Himself. In this way, the Maker of Adam became irrevocably and immutably a perfect human being.
Just as He made a woman from the rib of Adam, as we said above, so He borrowed flesh from the daughter of Adam, the Ever-Virgin Mother of God, Mary, and was born in the same manner as the first-born Adam, that is without seed. Through his transgression, Adam became the start of our birth into corruption and death, and similarly Christ our God, by fulfilling all righteousness, became the first-fruit of our renewal as incorrupt and immortal beings. This is what Saint Paul means when he says: ‘The first man was from the earth, a man of dust; the second man is the Lord from heaven. Those who are of dust are like the man of dust, while those who are of heaven are like the man from heaven’. And again: ‘Christ comes first, and then those who belong to Christ’.
Just as Christ became perfectly human in both soul and body, the same as us in everything except sin, He thus transfers His divinity to us through our faith in Him and makes us His kin, in accordance with His nature and His essence. Note this strange, new wonder. God took flesh from us, which He didn’t have by nature, and became a human person, which He hadn’t been. Since then He’s given His divinity to those who believe in Him – something which no angel or human being had ever before achieved- and they become gods by grace and position, which they hadn’t been. In this way, He grants them the authority to become children of God. This is why there have always been such people and always will be. Listen to Saint Paul on the subject: ‘And as we bore the image of the earthly, so let us bear the image of the heavenly’.
From Ethical Discourses I, Chapter 3.
The Aim of the Incarnation of the Word
What is the aim of the incarnate dispensation of God’s Word, preached in all the Holy Scriptures but which we, who read them, do not know? The only aim is that, having entered into what is our own, we should participate in what is His. The Son of God has become Son of Man in order to make us, men, sons of God, raising our race by grace to what He is Himself by nature, granting us birth from above through the grace of the Holy Spirit and leading us straightway to the kingdom of heaven, or rather, granting us this kingdom of heaven within us (Luke 17:21), in order that we should not merely be fed by the hope of entering it, but entering into full possession thereof should cry: our ‘life is hid with Christ in God’ (Col. 3:3).

From The Philokalia, "Practical and Theological Precepts".