The Birthplace of Saint Barbara

Saint Barbara is said to have been born and raised in the village of Gelassos (Glasius) near Heliopolis, where her father Dioscorus was the governor. Heliopolis was a well known Syrian city located between Lebanon and the mountain ranges of anti-Lebanon. It received its name, which translates from the Greek as "Sun City", because they worshiped the sun there in ancient times. In 1924, it became part of Lebanon and was named Baalbek, because of the ancient worship of Baal in the region. Gelassos was approximately 1.38 miles or 2.2 kilometers from Heliopolis.
In Heliopolis stood three grand temples to the ancient gods: the Temple of Bacchus, the Temple of Jupiter and the Temple of Venus. During the reign of Emperor Constantine the Great, the Temple of Venus was demolished and he outlawed the locals' ancient custom of prostituting women before marriage. He then converted the temple into a Christian church which at some point was dedicated to Saint Barbara, who became the patron saint of the city. It operated as a church into the 19th century. In the 1870s and '80s, its Metawali caretaker Um Kasim would demand bakshish from visitors and for use of the olive oil lamps used to make vows to Saint Barbara. Christians and Muslims still refer to the ruins of this church as El-Barbara or Barbarat el-Atikah.
Eusebius describes the destruction of the Temple of Venus and its conversion into a church (Life of Constantine, Bk. 3, Ch. 58) as follows:

Such actions as I have described may well be reckoned among the emperor's noblest achievements, as also the wise arrangements which he made respecting each particular province. We may instance the Phoenician city Heliopolis, in which those who dignify licentious pleasure with a distinguishing title of honor, had permitted their wives and daughters to commit shameless fornication. But now a new statute, breathing the very spirit of modesty, proceeded from the emperor, which peremptorily forbade the continuance of former practices. And besides this he sent them also written exhortations, as though he had been especially ordained by God for this end, that he might instruct all men in the principles of chastity. Hence, he disdained not to communicate by letter even with these persons, urging them to seek diligently the knowledge of God. At the same time he followed up his words by corresponding deeds, and erected even in this city a church of great size and magnificence: so that an event unheard of before in any age, now for the first time came to pass, namely, that a city which had hitherto been wholly given up to superstition now obtained the privilege of a church of God, with presbyters and deacons, and its people were placed under the presiding care of a bishop consecrated to the service of the supreme God. And further, the emperor, being anxious that here also as many as possible might be won to the truth, bestowed abundant provision for the necessities of the poor, desiring even thus to invite them to seek the doctrines of salvation, as though he were almost adopting the words of him who said, "Whether in pretense, or in truth, let Christ be preached."

Though the ancient Church of Saint Barbara is now in ruins, today there is a modern Greek Orthodox church dedicated to Saint Barbara nearby. 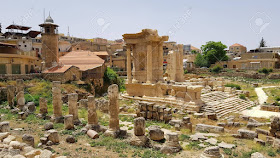 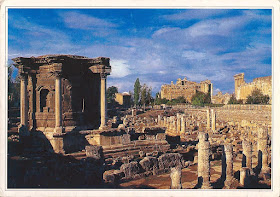 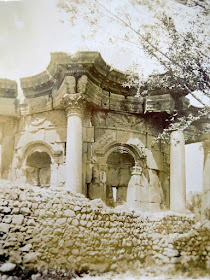 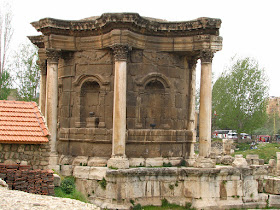