Saint Gurias (in the world Gregory Rugotin) was the first archbishop of the Kazan diocese, established in 1555. He was born in the town of Radonezh outside Moscow into the family of a courtier. His parents were not wealthy, and so from his early years he had to serve Prince Ivan Penkov as steward of his estates.
From his youth, Gregory was pious, humble and gentle, and he preserved his chastity. Accused of improprieties with the prince’s wife, Gregory was locked up in an underground dungeon for two years. This undermined his health, but it also intensified and deepened his religious fervor. In prison, he wrote a small booklet to teach children how to read and write. He donated the proceeds from his primer to the needy. 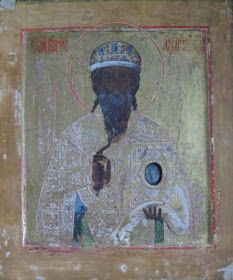 Released from prison, Gregory was tonsured with the name Gurias at the Saint Joseph of Volokolamsk Monastery, known for its strict monastic rule. In 1543, he was chosen by the brethren as abbot of this monastery. He administered it for almost nine years, and then he resigned as abbot and lived for two years as a simple monk.

Before becoming bishop, Saint Gurias directed the Trinity Selizharov Monastery in the Tver Diocese for one year. He was chosen by lot to the See of Kazan. Assisted by Saint Barsanuphius (April 11), Saint Gurias devoted himself to missionary activity. In his eight years as bishop there, four monasteries were organized, and the Annunciation Cathedral Church and ten more city churches were built. 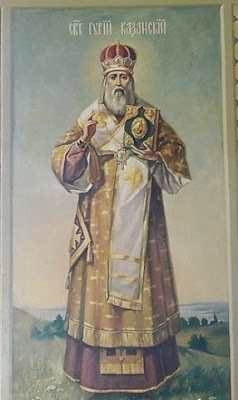 In 1561 the Saint fell grievously ill and could no longer perform the divine services himself. On feast days they carried him into the church, and he either sat or lay down, since he did not have the strength to walk or even stand. 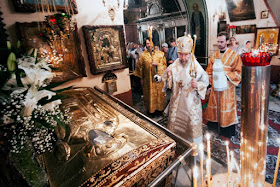 Shortly before his death on December 5th 1563, he received the great schema from Saint Barsanuphius, and he was buried in the Savior-Transfiguration Monastery. On October 4, 1595, the incorrupt relics of the holy hierarchs Gurias and Barsanuphius were uncovered. Saint Hermogenes, Metropolitan of Kazan (May 12), was present at the uncovering of their relics, and he described this event in the lives of these saints.
On June 20, 1613, the relics of Saint Gurias were transferred from the Savior-Transfiguration Monastery to the Annunciation Cathedral Church in Kazan. At present, the relics rest in Kazan in a cemetery church named for the holy Princes Theodore of Murom and his sons David and Constantine (May 21).