Saint Iakovos Tsalikes Appeared in the Center of Athens in 2016 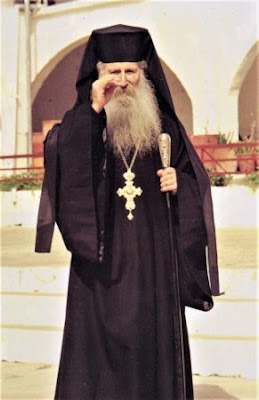 By Thanasis Constantinopoulos
It was March of 2016 and I was waiting for the green traffic light behind the Hilton Hotel in Athens. My relationship with the Church was nonexistent. Someone with a big beard approached me. I took him for a beggar.
From my open window he said to me:
"You're a good kid. The restaurant you have, it will go well, and the girl you met is good. Be with her."
Then he disappeared.
I immediately felt myself change internally.
"I'm sure I saw a Saint," I told Marita, the girl I met.
She showed me an icon of Saint David, but it wasn't him.
Searching the internet I recognized the previously unrecognizable face of Elder Iakovos.
At the Monastery of Venerable David I confessed, and I experienced the miracle of the "multiplication of the loaves," but with seventeen liters of gasoline given to me by the fathers of the monastery in order to return to Athens, since I had run out of gas.
I needed forty-seven liters to return to Athens and I arrived with seventeen. I was also able to travel long distances around Athens for the next two days.
Since then, the presence of Father Iakovos in our lives has been constant, since Marita and I were blessed with the mystery of marriage.
Source: This testimony of Thanasis Constantinopoulos is contained in the book Όσιος Ιάκωβος (Τσαλίκης), ένας σύγχρονος Άγιος, a publication of the fathers of the Monastery of the Venerable David the Elder in Evia. Translation by John Sanidopoulos.