The Life, Work and Thought of St. Amphilochios of Iconium 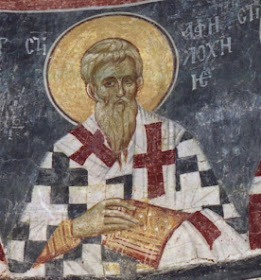 St. Amphilochius of Iconium
By Fr. George Florovsky
I. Life.


Amphilochius was closely connected with the great Cappadocians and apparently was related to Gregory the Theologian. He was born between 339 and 345 in Caesarea in Cappadocia, where his father was a rhetorician. He studied with Libanius in Antioch and then went to Constantinople as a rhetorician and lawyer. About 370 he returned to his native land and for several years lived in the home of his parents, in spite of the fact that he was always attracted by the monastic way of life. At the end of 373 Amphilochius, against his will, was consecrated bishop of Iconium. His elevation was probably due to the influence of Basil the Great. Amphilochius was responsible for a very large area (he was the first metropolitan of the new province of Lycaonia) and he frequently relied on Basil for advice and help in his pastoral duties. He turned to him during his struggle with the Pneumatomachi and received in answer Basil's tract On the Holy Spirit, which was intended for the instruction of the dissenters. He was also the recipient of Basil's Canonical Rules. Basil, for his part, had a high opinion of Amphilochius. Amphilochius began to study theology only after he became bishop. It is unlikely that he devoted much attention to problems of speculative theology because he was not interested in philosophy and he had no background in it. This is evident in all of his theological writing. His theology is simple, even to the point of naiveté, and it is always based on Biblical material.
In 381 Amphilochius traveled to Constantinople for the Ecumenical Council, where he was recognized as the "witness of the faith" for Asia. He returned to Constantinople several times in the following years. This was a period of intense religious controversy and Amphilochius was forced to defend himself against the Arians, Apollinarians, and also the Messalians (or Euchites), in opposition to whom he summoned a council in Side. On the whole Amphilochius was a gifted administrator in both Church and civil affairs. It is possibly due to his influence that the government took such severe measures against the Encratists. During the last years of his life Amphilochius maintained close contact with the religious circle of Olympiada (Olympias) in Constantinople. Apparently he died shortly after 394 but the precise time of his death is unknown.
II. Works.


Very few of Amphilochius' works have survived. Eight homilies have been preserved, including one celebrating the Feast of the Purification of the Lord [In occursum Domini], which is the oldest known sermon on this feast. His Oration at Midpentecost [In mesopentecostem] is also significant, for it is one of the earliest references to the feast of Midpentecost. It is connected with the liturgical work of the Cappadocians and their effort to organize the yearly cycle of Church services. The homiletic works of Amphilochius display his talent as a rhetorician. His style is expressive and striking and is reminiscent of Gregory the Theologian. In his commentaries on the Gospel, Amphilochius strives for historical accuracy and his main goal is to bring the historical figure of Christ to life for his listeners. There is good reason for giving Amphilochius a prominent place in the history of homiletics and for seeing in him a predecessor of John Chrysostom, who was perhaps immediately influenced by him.
In addition to homiletic literature, an epistle written by Amphilochius to the council of Iconium of 376 has survived, as well as a didactic work, Epistula iambica ad Seleucum. From the other compositions of Amphilochius only twenty-two fragments in all have been preserved. Apparently he wrote many other works, including tracts against the Arians, on the Holy Spirit, and on the apocrypha (widely read in certain heretical sects). He also wrote a commentary on Proverbs 8:22 and on a series of Christological texts. Recently a long fragment of a work against the Encratists was discovered.
III. Thought.
Trinitarian Thought.
Amphilochius was not an independent thinker. The content of his theological works was determined by his needs as a pastor and teacher in his struggle against heresy. This does not mean that his theology is lacking in originality. On the contrary, it is clearly inspired by a calm and sincere faith. Amphilochius' doctrine of the Trinity is similar to the teaching of Gregory the Theologian, and he defines the hypostatic properties of the Son and the Spirit as generation and procession. At the same time, he emphasizes the unity of the Trinity by designating the hypostases with the new term “mode of being,” τροποι της υπαρξως. This expression had not been used by the Cappadocians in their theology. Amphilochius was the first to apply it in this sense, so that in his system the names of the Trinity indicated not essence, but relations or "modes of being." By this conception the three hypostases are defined in such a way that their equality is maintained. In this innovation, theology acquired a valuable philological tool and by the beginning of the fifth century this term was generally accepted in theological usage.
Innovative Christological Terminology.
Amphilochius also developed innovative terminology in his Christology, which is based on the concept of "two natures in one Person." From this Amphilochius concludes that Christ has a "double essence" and a double consubstantiality. He anticipated later theological usage by introducing the term "hypostasis" in his writing about Christ. He was clear in his insistence on the completeness of the human nature in Christ, which led him to conclude that Christ has two wills. Amphilochius stressed that the two natures are indivisible and yet unmerged in their union: "I speak about one Son from two natures, unblurred, unchanging, and indivisible." This is significant for his doctrine of salvation. He who suffers for mankind is a man and men are saved through this human suffering. Men are liberated from death not by an act of authority but by the compassionate suffering of a fellow man. At the same time the curse placed on mankind can be removed only by God, and for this reason Amphilochius sees the hypostatic focus of the person of the God-man in His Divine nature, which has been implanted within the temple of human nature.
From The Eastern Fathers of the Fourth Century.