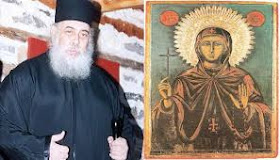 By Monk Damaskenos of Gregoriou
Our Revered Elder and Abbot of our Holy Monastery [of Gregoriou], Archimandrite Fr. George Kapsanis, took over the helm of the monastery in October 1974, and suffered a triple stroke in 1990.
He was in bed for nine months with horrible pain. Saint Anastasia appeared to an Orthodox African, Fortunatos, now Monk Neophytos, who was working as a missionary in the Orthodox Unit in Kananga of Congo. He was a guest of our monastery for six years, and in his sleep she gave him an envelope, saying: "Give this envelope tomorrow to the Elder." The next day, our Elder's health had been completely restored.
I have also been made worthy to meet and talk with some old fathers, who told me of visits of our patron saints.
- Papa-Dionysios, who was from Zevgolatio of Kalamata, and the last two years (1972-1974) became abbot of the monastery, told me the following incident. Once, he was choked by thoughts of fleeing to the Holy Land. At night however the three patrons came to him in his sleep and told him not to leave because it was not the will of God.
- Fr. Demetrios, who lived in our monastery for 23 years and reposed in 1977, at the age of 46, spoke to me of two things that had to do with Saint Anastasia. One time he was visited by the Saint, at the time he was doing his prayer rule. She was dressed in white and in her teenage years. Seeing her he got scared and asked: "Are you perhaps a temptation?" With a nod she confirmed that she was not. She then smiled and left.
- Another time she was sent by Fr. Demetrios to his paternal home, where his brother was staying, to heal his child who was sick. The Saint appeared to his nephew in his sleep and said: "Your uncle sent me to make you well. I am Saint Anastasia from the monastery where your uncle lives."
These and other newer miracles have occurred, not only to the Brotherhood of our monastery, but to other Athonite Fathers and Clergy and devout Christians in the world.
Source: Translated by John Sanidopoulos.
John at 2:13:00 PM
Share
‹
›
Home
View web version