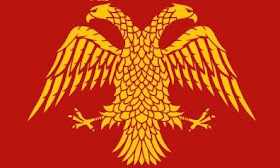 The Romiosini of 1821 and the Great Powers
Orthodoxos Typos,
25 March 1978
(Translated by John Sanidopoulos)
By Protopresbyter Fr. John Romanides
1. 1821 and the Objective of the Great Powers
In 1821 the Romans initiated a revolution, in order for the state of Romiosini to become once more Roman civilization, which they kept with pride and every form of sacrifice during the difficult years of the Turkish occupation, the Frankish occupation and the Arab occupation.
The Great Powers [Russia, France and Great Britain] however only wanted to weaken or destroy and not divide the Ottoman Empire. Neither did they want Romiosini as a state, nor as a civilization. For this reason no Roman with the plans for the Romiosini of Rigas Velestinlis ever received support and reinforcement from the Great Powers. Those who sought to become rulers of that Romiosini, were they who would accomplish either consciously or naively the breakup and dissolution not only of the Ottoman Empire, but also of Romiosini.
2. The Patriarchates of the Romans
In order to understand why the Great Powers wanted to breakup and dissolve Romiosini, we must have in view that in 1821 Romiosini was well organized as a state within states inside the Ottoman Empire, around the self-governed community and parish, around guilds and around the dioceses and metropolises and archdioceses of the four patriarchates of the Romans, namely Constantinople New Rome, Alexandria, Antioch and Jerusalem, as well as the autocephalous and autonomous Churches of Cyprus, Sinai, Crete and the Dodecanese.
The Ecumenical Patriarchate as an ethnarchy, in agreement with the Islamic system of the millet, governed the Romans of the Balkans, the Crimea, and the Asiatic Turks, shepherded the Orthodox Slavs of Russia, Ukraine and Poland, and had presidency over the other patriarchal and autocephalous Churches of the Romans. Just as the Sultan was the head, that is the Caliph of Islam, so the Ecumenical Patriarch was the head of Romiosini and the Orthodox in general.
Note well that the patriarchs and hierarchs all came from monasticism, who while in the monasteries kept intact the national memory and treasures of the nation. By its nature Orthodox monasticism influenced the people without accepting ideological influences coming from outside Romiosini.
The Roman people gathered around the monasteries and the clergy, and the ethnarchs, patriarchs and archbishops maintained the whole ethnic, religious and cultural unity while clearly being distinguished as a civilization from that of the Franks and Islam.(1)
3. The Great Success of the Ecumenical Patriarchate
The great success of the Ecumenical Patriarchate and the hierarchy regarding the national unity of Orthodox Christians is seen clearly by the fact that nearly all Orthodox Christians in the Ottoman Empire bore with national pride and consciousness the name Roman. As Romans they were conquered and Romans they remained.
Notes:
1. See John Romanides, Romiosini, Romania, Roumeli, Thessaloniki 1975.
Part Two