Oxyrhynchus, the Egyptan City Once Full of Saints 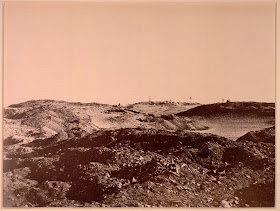 Rufinus visited Oxyrhynchus in the 370's, and was the first to describe in the Latin language an Egyptian city so thoroughly Christian, it can be adequately described as a city of God on earth. The city had a population of male and female monastics which were more in number than regular inhabitants, with twelve churches and numerous monasteries. Some believe Rufinus was exaggerating his account to rouse the imaginations of Christians in the West, but we know that the twelve churches he describes in the city of his time had increased to forty or more by 535 A.D. No doubt it was an important Christian center in its time, and the disappearance of its numerous churches and monasteries especially due to the Islamic conquest is much to be regretted. Today relics of its Christian past can still be seen in some pillars in the chief mosque of Behnesa, and a single Corinthian column in the modern Coptic cemetery in the desert to the southwest of the town ruins.
By Rufinus of Aquileia
(History of the Monks of Egypt, Bk. 2, Ch. 5)
And we came also to Oxyrhynchus, a great city in the Thebaid, but we are not able to relate all the wonderful things which we saw therein; for the city is so full of the habitations of the brethren that the walls thereof are wellnigh thrust out with them, so many are the brethren! And there are so many other monasteries round about the walls, on the outside, that one would think that they were another city, and the sanctuaries of the city, and the temples which are therein, and all the spaces about them, are filled with the monks. And besides these there were twelve churches in which the people assembled, for the city was exceedingly large. There was a place set apart for the monks to pray in each of the monasteries, and one might think that the monks were not very much fewer in numbers than the ordinary inhabitants of the city, for they were so numerous that they even filled the buildings at the entrances to the city, and some of the monks lived in the towers by the side of the gates thereof. Now the people said that the monks who lived inside were five thousand in number, and that five thousand brethren lived round about it, and there was not an hour, either of the day or the night, wherein they were not performing the service of God.
There were no heretics in the city, nor did pagans dwell therein. All the inhabitants of the city were believers, and they would hearken to the Scriptures so readily that the Bishop was able to proclaim peace to the people even in the streets; and the officers and the princes of the city, who were lavish in their gifts to the congregations, used to place watchers at the gates and entrances thereof that if they saw any needy person or any stranger they might bring him to them, in order that they might supply his need from their gifts. And what shall we say concerning the fear of God which was in these men to such a degree that, when they saw us, who were strangers, passing through the streets, they drew nigh, welcoming us like angels? And how can a man describe adequately the multitude of monks and the innumerable virgins who used to live there? Now we would make known that which we have learned from the holy Bishop who was there, namely, that he had under his authority ten thousand monks and twenty thousand virgins. I am wholly unable to express how great is the love of strangers and the affection which exist among these men and women, for our cloaks and the other portions of our apparel were wellnigh torn to rags by the force which each one of them, in the ardor of their love, displayed in dragging us to their home. And we saw there multitudes of fathers and of great monks who possessed gifts of divers kinds, for some had the gift of preaching, and some of abstinence, and some of doing mighty deeds, and some of working signs and wonders.