In the 17th century the Persian aggressors razed churches, monasteries, and fortresses and drove out thousands of Georgian families to resettle them in remote provinces of Persia. The deserted territories were settled by Turkic tribes from Central Asia. In the chronicle The Life of Kartli it is written: “The name of Christ was not allowed to be uttered, except in a handful of mountainous regions: Tusheti, Pshavi, and Khevsureti.”
But the All-merciful Lord aroused a strong desire in the valiant prince Bidzina Choloqashvili of Kakheti and, together with Shalva and his uncle Elizbar, princes of Aragvi and Ksani provinces, he led a struggle to liberate Kakheti from the Tatars. (The Persian governor of Kakheti, Salim Khan (1656-1664), had been encouraging the Tatar tribesmen to profane the Christian churches.)
Fearing that the enemy, who had already conquered Kakheti, would soon move in and also dominate Kartli, the princes Bidzina, Shalva, and Elizbar united the forces of those two regions in preparation for the attack.
After much deliberation, Bidzina announced his intention to his father-in-law, Prince Zaal of Aragvi. Zaal’s soul was spiritually pained by the countless misfortunes and injustices his country had suffered, and he quickly pledged his support for the effort. He agreed to participate in the insurrection anonymously, while the Ksani rulers Shalva and Elizbar would command the armies.
On the moonless night of September 15, 1659, the feast of the Alaverdi Church (The feast of Saint Joseph of Alaverdi) the united army of all eastern Georgia assembled and crossed over the mountains, past the village of Akhmeta, and launched a surprise attack on the Persians from Bakhtrioni Fortress and Alaverdi Church. The invader’s armies were so utterly crushed that their leader, Salim Khan, the Persian governor of Kakheti, barely succeeded in escaping from the avengers, after he had abandoned his family and army. 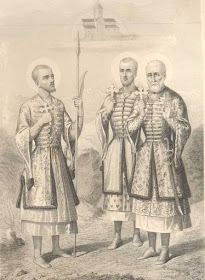 The victorious Georgian army offered prayers of thanksgiving to the Lord God and Great-martyr George, the protector of the Georgian people, who had appeared visibly to all during the battle, riding his white horse like a flash of lightning and leading the Georgians to victory.
The joy was great but short lived. The furious Shah Abbas II (1642-1667) ordered King Vakhtang V of Kartli (1658-1675) to deliver to him those who had instigated the insurrection.
Certain that they would receive no mercy from the shah, Georgia’s heroic liberators nevertheless set out for Persia without complaint. The shah received them with respect and generously bestowed gifts upon them, but then demanded that they renounce the Christian Faith. Neither bribery nor flattery would break their will, so the shah ordered his servants to arrest and torture them, strip off their clothing, and cast them, bound, under the blazing sun. Tormented by thirst and insect stings, the martyrs were periodically tempted to renounce Christ, but with God’s help they resisted every temptation.
Finally the enraged Salim Khan, the vassal of Shah Abbas, ordered the beheading of Elizbar and Shalva, hoping by this to break Bidzina’s resolve. But his efforts were in vain. “There is nothing sweeter than death for Christ’s sake!” Bidzina proclaimed. 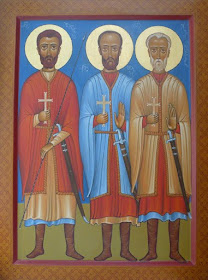 The Ksani princes calmly bowed their heads, but the undersized executioners could not reach the stately princes with their swords. So the shah’s henchmen hacked each of the princes in two at the shins, then decapitated them after they had fallen to an accessible height.
But even the murder of his companions would not cause Saint Bidzina’s will to waver. So the enemies resolved to break his will by mockery. They draped the bound prince in a chadar (the veil worn by Muslim women), seated him on a donkey, and paraded him through the streets. Then they began to butcher him alive. One by one they cut off his fingers and toes, then they chopped off his hands and feet, then his arms and legs, until only his head remained unharmed. It was clear from the movement of his lips that the holy martyr was praying.
Then one of the persecutors pierced his heart with a spear. This happened in the year 1661. The mutilated bodies of the holy martyrs remained under the open sky for one day, and no one was permitted to go near them. During the night they were illumined by a brilliant light.
Then a group of Christians secretly buried the saints’ remains. Several years later Saint Shalva’s wife Ketevan and son David sent several of the faithful to Persia to bring back their relics. Crowds of believers gathered at the Kartli border to meet the holy relics and accompany them with hymns of rejoicing to their final resting place at the Ikorta Church of the Archangels.