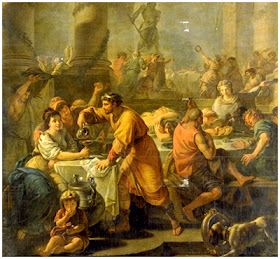 Oration 4: Adversus Kalendarum Festum attacks the pagan customs and abuses of the New Years feast of the late 4th century, denying everything that Libanius had said supporting it. The sermon is an earnest protest against the evils into which New Year's festivals had drifted in his day. This is the earliest extant New Year's sermon, and in that respect it is unique. The strange customs portrayed in it make it peculiarly fascinating.
Oration 4

Against the Festival of the Calends
By Asterius of Amasea
January 1, 400 AD
Yesterday and today two feasts, not only unrelated and discordant, but wholly adverse and hostile to each other, have been celebrated. One is of the rabble without, gathering, in large sums, the money of mammon, and bringing in its train bargaining, vulgar and mean. The other is of holy and true religion, inculcating acquaintance with God, and the virtue of the purified life. And since many, preferring the luxury and absorption which arise from vanity, have left off going to church, come, let us with a discourse dispel from your souls this foolish and harmful delight, which as a sort of inflammation of the brain, with laughter and jesting, induces death. And in the treatment of the subject I may fittingly emulate Solomon. For in counseling young men to keep themselves from the snares of licentiousness, in order to make his own admonition cogent and effective, he personifies excess as an abandoned woman, and, by portraying all her wickedness, he thus exposes her to her dupes as deserving of their hatred.1 Wherefore I, too, after showing the vanity of the human heart in my discourse, will attempt to convert the lovers of pleasure from their misdirected zeal.
aster