The Cell and Tomb of Saint Melania the Younger in Jerusalem 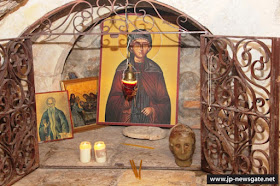 Saint Melania the Younger was initially a wealthy matron from Rome, who came to Jerusalem in 417 to establish a convent near the Mount of Olives and live out the rest of her days in asceticism. When she arrived in Jerusalem with her mother and husband Pinianus, Melania with her mother took up her abode in a little cell of the common hospice for pilgrims, close to the Church of the Resurrection, while Pinianus, it seems, was separated from them, the men being lodged in a place apart from the women. Here, then, in the heart of Jerusalem, and flooded with the luminous rays from our Lord's Cross and Sepulchre, Melania's soul was consumed more and more with the fire of Divine Love. Buried in obscurity, and enjoying the most complete self-effacement, she found her delight in continual fasting, in unwearied prayer, in charity and assiduous study of the Holy Scriptures. Her brief rest was taken on the hard ground, covered only with little mats of rough hair-cloth. When the shadows of evening fell, and the custodians at the end of Vespers closed the gates of Constantine's Basilica, it was a beautiful and touching sight to behold Melania go forth alone from her little cell, and prostrate herself before the doors of the Sanctuary, there to pass the night in prayer and vigil until they were opened again at cock-crow in the morning. The severe and prolonged fasts, with other austerities, brought on an illness during which it was with great difficulty that the Saint was prevailed upon to accept a pillow upon which to rest her aching head.
In the area of this cell, after her repose, Cyril of Scythopolis relates how Patriarch Elias (494-516) brought together the ascetics associated with the Holy Sepulchre, who had earlier been living around the Tower of David, and built a monastery for them near the patriarchal residence. These ascetics were known as the Spoudaioi, for they served the Holy Sepulchre with haste and diligence, and the monastery came to be known as the Monastery of the Spoudaioi (or Spoudaeon Monastery). This monastery was dedicated to the Mother of God, because it was believed that here the Virgin Mother, upon seeing her Son crucified, cried out with a loud wail of sorrow. Later on it came to be known as the Hodegetria Monastery, due to an icon there of the Panagia Hodegetria, and eventually it was called Megale Panagia (Great Panagia), as it is known today. It is also called the Monastery of Saint Melania the Roman, because under the monastery is the crypt of Saint Melania where her cell is located, as well as her tomb. There is also a chapel there dedicated to Saint Melania. The monastery also treasures a Gospel Book copied by Saint Melania, and chains she wore hidden under her clothing to increase her ascetic exercises. Over the centuries the monastery was occupied by men and women at different times, but today it is occupied by nuns. In the 19th century there were about thirty nuns there, while today there are about a dozen. 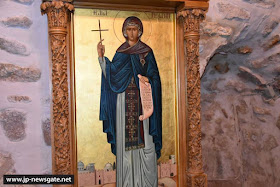 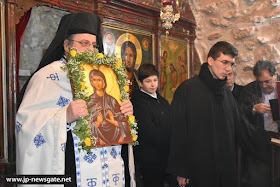 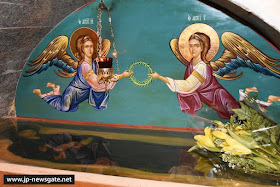 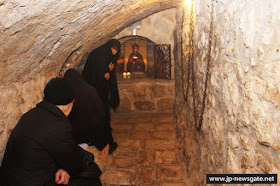