The Chapel of Saint Nicholas on the Battlecruiser Averof 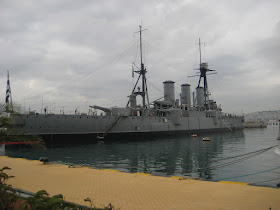 History
Georgios Averof is the world's only surviving heavily armored cruiser of the early 20th century. During the Balkan Wars (1912-13), she was the Hellenic Navy fleet flagship during the campaign in the North and Central Aegean islands, as well as the coastal cities of East Macedonia and Thrace.
Greece remained neutral during most of World War I. Eleutherios Venizelo's government in 1917 decided to participate on the Allies' side. At the end of World War I, November 1918, the Averof sailed to Constantinople and raised the Hellenic flag as one of the winning powers of the Great War. After the signing of the peace treaties, Averof together with the rest of the fleet moved the Hellenic troops to Asia Minor.
She served on the Allied side during World War II, having fled to Egypt and the Indian Ocean with the rest of the fleet. The Averof led the Greek naval force when the fleet dropped anchor in the Faliron Bay, Athens, on October 17, 1944. The raising of the ship's war flag on the Acropolis marked Athens' liberation.
Georgios Averof last voyaged to Rhodes, May 1947, to commemorate the accession of the Dodecanese islands from Italy. It was retired in 1952, and stayed in Poros until 1983. In 1984 the Greek Navy decided to restore her as a museum and in the same year she was towed to Faliron Bay, where she is anchored to this day and functioning as a floating museum, seeking to promote the historical consolidation and upkeep of the Greek Naval tradition. 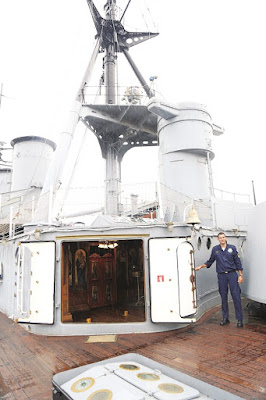 Chapel of Saint Nicholas
At the first visitor level, at the entry level, the visitor will encounter the Chapel of Saint Nicholas. When the ship was in operation, there was also an Archimandrite on board, who guided the crew during the difficult moments. When the ship was acquired, Archimandrite Prokopios Karamanos in his enthusiasm rushed to order luxurious gold vessels and utensils for a chapel from an Athenian artistic goldsmith shop. This would be the only chapel on a ship during the Balkan Wars. However, the Ministry of Navy's economic malaise did not allow them to be picked up and the utensils were now available for sale to the public. The disappointment of the Archimandrite was great, as was the amount that could not be covered by public funds.
Until one morning a large box of sacred vessels and utensils, which an anonymous donor had paid for, was handed over to the Department of the Marines. This renewed the enthusiasm to have a chapel on the ship, but there was also a search for the donor. A journalist of the time went in search and discovered that the box was handed over by a wealthy Greek from Egypt. The generous donation was made by Maria Peza-Kotsika, wife of the the Egyptian benefactor Polychroni Kotsika and mother also of the benefactor Theodoros Kotsika. The latter married the daughter of the great benefactor Emmanuel Benakis, whose name is Despoina. It was the time when national ideology coexisted with cosmopolitanism.
Saint Nicholas is considered to be the patron saint of sailors, because in his life there are mentioned miracles related to the sea. It is no coincidence that there is an icon of him on ships, both merchant ships and war ships. This is why the Averof dedicated its chapel to Saint Nicholas. Many believe it was he who protected the ship and it was the reason it did not lose a single battle.
The Christian sentiments of Greek society at that time, as well as the personal beliefs of the Navy officers, ensured that on the new ship, the battlecruiser Averof, there was a chapel on the deck, although it was not foreseen in the original plans of the ship, which were adjusted according to the relative wish and order of the Navy. The chapel was made at the point where the canon room was designed. It is the only warship with a church and in fact a priest always served in it, who was the third in order of seniority on the ship. In this chapel many sacraments were celebrated for the crew, including weddings and baptisms. And the priest also had the important task of educating his mostly illiterate crew, teaching them to read and write. 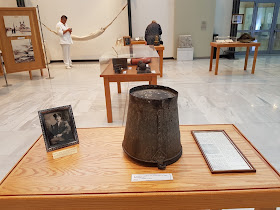 The Miracle of Saint Nicholas on the Averof Before the Battle of Elli
According to numerous testimonies, as we mentioned, it was believed Saint Nicholas always protected the ship. One particular example comes from before the Battle of Elli. The Battle of Elli, or the Battle of the Dardanelles, took place near the mouth of the Dardanelles on 16 December 1912 as part of the First Balkan War between the fleets of the Kingdom of Greece and the Ottoman Empire. It was the largest sea battle of the Balkan Wars.
On the eve of the battle, a petty officer was cleaning the ship with a bucket. As soon as he finished, he went to take a nap, and when he woke up, he saw to his surprise the face of Saint Nicholas on the bucket. He showed the bucket to everyone, and no one could deny that it was the face of Saint Nicholas, as pictured in his icon. The bucket was then taken to the Greek admiral Pavlos Kountouriotis, who was a man of deep faith. With tears in his eyes, he said it was a sign from God that they would win the battle. And it indeed happened as he said. This is why Kountouriotis ordered after the triumphant victory for a procession with the icon of Saint Nicholas to take place.
After this the bucket was placed in the chapel. The priest at the time was named Dionysios Dafnos, who in 1915 was elected Metropolitan of Sparta, and he took the bucket with him. In 1937 the King of Greece visited Sparta, and when the Metropolitan told him the story, the King told him to return the bucket to the ship, where it belonged. Today this bucket can still be seen on the ship. This is one of the miracles written in the logs of the ship.

The Wooden Cross of Kountouriotis
Kountouriotis would bless the crew with a wooden cross. "Whatever happens to me is from God," he would say. Truly the heroic and the divine coexisted on this ship.
The Turkish fleet had come out of the Dardanelles and the Greek fleet was moving to meet them. Kountouriotis asked to bring a box from the chapel, which had a wooden cross. With the cross he went throughout all the ship and blessed all the crew. He ascended to the counter bridge, touched it with the cross, and said, "Here where the cross touches a Turkish missile will not touch." Indeed, Turkish forces dropped 1,800 missiles against the Averoff, but the ship only took 15.
The "Coincidence" of the Icon of Saint Nicholas
After all this, one could not deny that the patron saint of the ship is Saint Nicholas. Even today, Saint Nicholas declares his presence. In 2013, the Metropolitan of Syros, Dorotheos, visited the Averof, who, after the tour by the commander, said that at some point he would send him something. A week later, an event for the cutting of the Vasilopita for the New Year would take place on board. Noting the pending issues for the day of the event, the commander thought that an icon of Saint Nicholas was missing from the room. So he wrote on a small sheet of paper "icon of Saint Nicholas" in order to give it to the responsible person to arrange it. Entering the room and the moment he went to give the person in charge the paper, a sailor approached him and gave him a package that had just arrived from the Metropolitan of Syros. It was an icon of Saint Nicholas! "Nothing, in the end, is a coincidence," said the commander, considering that a recurring event ceases to be a coincidence. 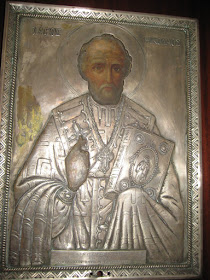 The Miracle of the Silver Icon
Another testimony reveals that yet another victory was due to the power of faith. In 1942, the English commander, responsible for the Indian Ocean region, called on the commander of the Averof and asked him to accompany seventy merchant ships, telling him that because the threat was known, they would be happy if they managed to reach half the commercial vessels at their destination. Because of the heat, to cool down, they took the mattresses and slept on the deck. One evening Papanikolopoulos had taken his mattress to the stern and was asleep. Suddenly, a repetitive noise woke him up. He stood up and saw something shining in the water and leaning on the ship. He shouted at the bridge to stop and went down to see what was causing the noise. What he saw was a silver icon of Saint Nicholas, which in an unexplained way was found in the sea and followed the ship. All the crew with tears in their eyes showed the commander the icon, who immediately called for a Divine Liturgy and procession. Saint Nicholas was on their side. They made it 3,500 miles and no one was lost! 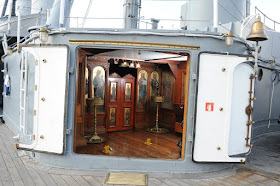 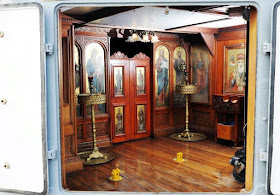 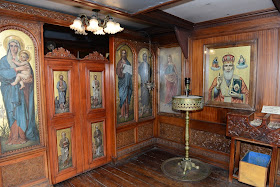 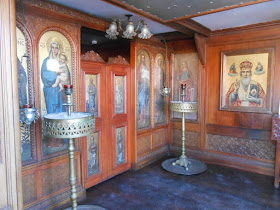 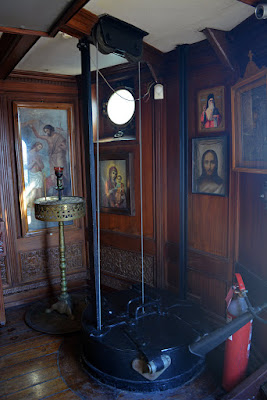 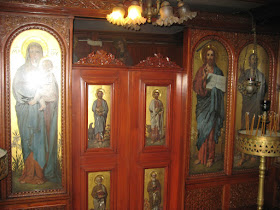 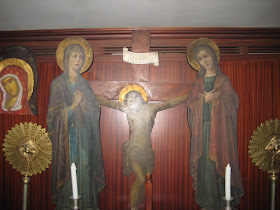 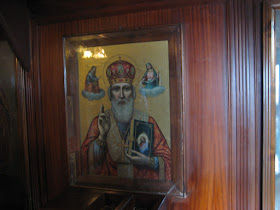 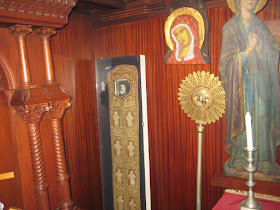 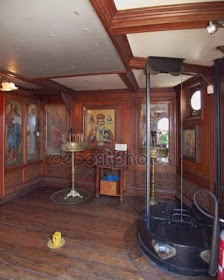 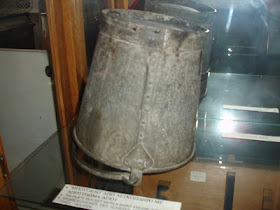 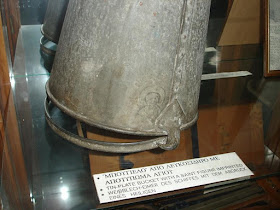 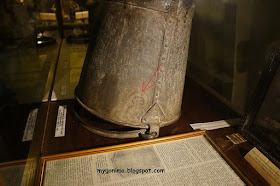 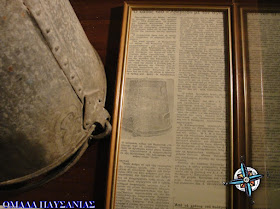 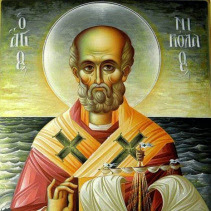