Synaxarion of the Holy Martyr Boniface and his Holy Mistress Aglaia

Verses
Boniface sought the bones of the Martyrs,
He found himself to be a Martyr beheaded by the sword.
On the nineteenth Boniface was beheaded.
This Saint lived during the reign of Emperor Diocletian (284-305), and was the servant of a senatorial woman named Aglaia, daughter of Akakios the proconsul of Rome. In so far as he was a man, he was conquered by wine and passionate love for his mistress. But he was merciful and hospitable. Eager to help those who were in need, he had compassion and sympathy towards the misfortunes and supplications of those who hurt. His mistress also was merciful, and loved the Martyrs of Christ. One day she said to Boniface: "Go to the East, where the Saints are being martyred, and bring back relics of the Saints, that we may have them as an aid towards the salvation of our souls." Boniface smiled and responded: "If I bring back my own relic, will you accept it?" Aglaia said to him: "It is not the time to joke." Placing much value in these, she put in his heart the fear of God. Praying that he return with a fortunate return she sent him off, where the Martyrs of Christ were being tormented. 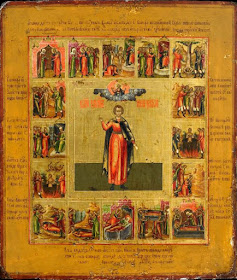 Boniface therefore went to Cilicia with twelve servants and much gold, where he found male Saints being martyred, and he tenderly kissed their bonds and wounds. Then he stood before the governor and having confessed himself to be a Christian, he was hung upside down, and his body was scourged to his bones. They then stuck sharp reeds under his nails. He was then put inside molten lead. After he was put in a cauldron full of molten pitch. And the Saint was kept unharmed by the grace of God, while fifty common men were crippled. Lastly, they cut off his honorable head. And after it was cut off, in a strange manner there came forth from it milk mingled with blood. From this fifty men came to believe in Christ. Meanwhile his fellow servants thought he was to be found drunk in a tavern as was his habit, and they went around here and there looking for him. As soon as they found out what happened from the soldiers, they found his relic, and fell on top of it weeping, tenderly kissing it and asking for forgiveness for their prior accusation. They therefore purchased it for five hundred florins, and took it to his mistress. There she had been notified beforehand of the coming of his relic after a revelation from a holy Angel. 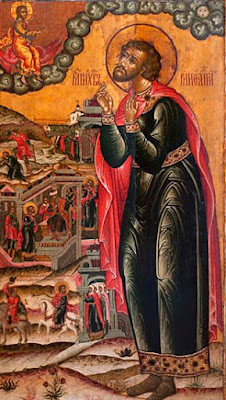 With joy Aglaia met beforehand the holy relic, honored it in a very costly way, and buried it approximately four miles outside of the city of Rome. Afterwards she had a church built in his name in the midst of the city, which in beauty and material was most brilliant. There on a daily basis a spring of healing issued forth. From that time forward, she passed her life in a venerable and God-pleasing manner, occupying herself with such harsh asceticism, that she was made worthy to receive the grace to work miracles. Then in peace she delivered her spirit to the Lord. 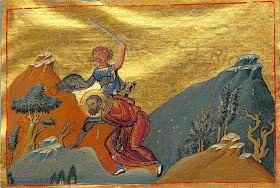 Apolytikion in the Fourth Tone
Thou didst fervantly follow after the Martyrs, and confess Christ before unbelievers, O Boniface. Thou didst give thy body to modest Aglais, as an imperishable treasure: healings and mercy flow from it for the world.
Kontakion in the Fourth Tone
Thou didst offer thyself as a blameless sacrifice, O wise crown-bearer, to the One Who is about to be born of a Virgin for thy sake, O Boniface. 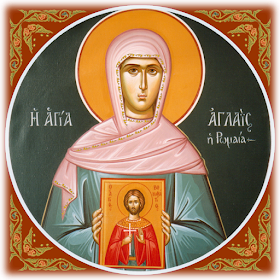 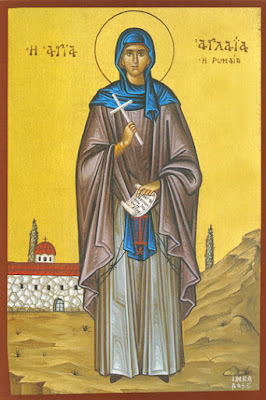 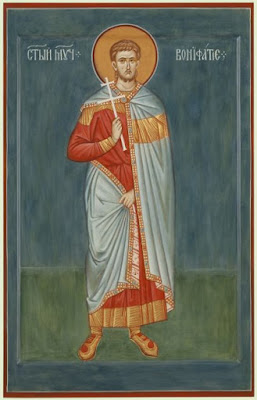 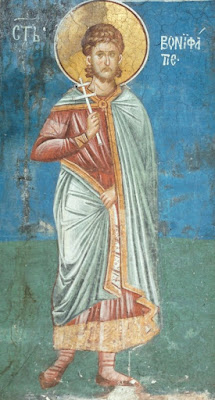 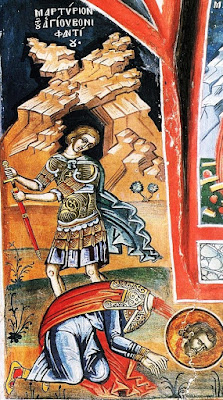