Tales of a Guardian Angel From the Streets of London 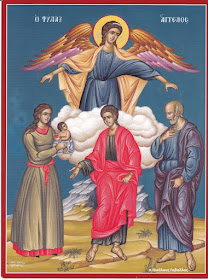 By St. Nikolai Velimirovich
First Narration:
There is a nice book written by an English priest, Father Cyril Angelikos. This priest is our contemporary, reposing not long ago. He served in a church in London dedicated to the Holy Archangels. And he often had visions of angels. We will refer here to two cases where we do not have visions, but the voice and action of the angels. Father Cyril spent all his time in the Services, or in the ministry to the sick and the poor. At one point he stood in front of his home and was thinking about which house to visit now. Then he heard a voice - the voice of a Guardian Angel: "Go see the grandmother at so and so." He immediately obeyed and went. When he came into that woman's house, she cried out from the bed how shortly before she had prayed to the Angel of God to bring to her Father Cyril. "See," she said, "I'm sick and I have no one to send to call for you. Here in the side room a woman gave birth and the newborn is dying. Hurry, Father!" Father Cyril rushed to baptize the child before he died.
Second Narration:

One winter evening Father Cyril was in a poor house and he stayed there till evening. When he began going down the stairs in the dark, he felt someone push him back. Again when he tried going down the stairs someone's hands would push him back with force. Father Cyril went back and looked for a candle. With the candle he began to go down the stairs. But when he reached that step where he was repelled, he saw that the rest of the stair had been destroyed and shattered. If in the dark he took even one further step he would have fallen and been killed. Instead the Angel's hand pushed him back and saved him from death.
From the book Emmanuel.