Translation of the Sacred Relics of the Apostle Philip to Cyprus 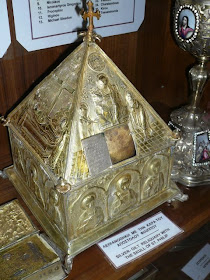 Though the relics of the Holy Apostle Philip for the most part were taken from Hieropolis to Rome, and they have fallen into relative obscurity in Rome, this is not the case on the island of Cyprus. A portion of the skull of Saint Philip the reached Paphos, specifically the village of Arsos, following the fall of Constantinople to the Crusaders in 1204. It was transferred to Cyprus specifically on July 31, 1204, hence its annual feast day which is celebrated by the faithful till this day on July 31.
A church dedicated to the Apostle Philip was built in this village to house the miraculous skull (which has four imperial seals on it, among which is that of Emperors Theodosius the Great and Heraclius), and today is considered one of the areas oldest monuments. A section of this piece of the skull was distributed to various places. When Constantinople was restored to the Romans in the late thirteenth century the relic of the Apostle was transferred to another village in Paphos, known as Arsinoi, for security reasons. The reliquary containing the relic was stolen in 1735, so in 1770 Metropolitan Panaretos of Paphos had another reliquary made which is the same we see today. For purposes of greater security, in 1788, the silver reliquary containing the skull of the Apostle (along with a crown that was made for the skull in 14th or 15th century Constantinople) were transferred to the ancient Monastery of the Holy Cross in Omodos where it remains till this day. Also to this day, many miracles occur by the grace of God coming through this skull. 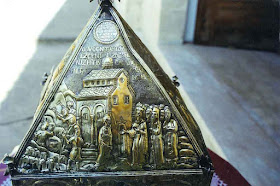 In 1757 the Protopsaltis and Hieromonk Chrysanthos composed a Divine Office in honor of the translation of the relics of Saint Philip, which was published in Venice. At the museum of Kykkos Monastery in Cyprus there are also two empty reliquaries that contained relics of the Apostle Philip; these held portions of the hand and knee of the Apostle.
John at 10:49:00 AM
Share
‹
›
Home
View web version