The Hieromartyr Bishop Valentine* and his three disciples, Proculus, Ephebus and Apollonius, and the righteous Abundius, lived during the third century. Saint Valentine was a bishop in Umbria (Italy), in the city of Interamna (Terni). He received from God the gift of healing various maladies. He cured the brother of the Roman tribune, Frontanus, of an illness.
At this time three pagan youths, Proculus, Ephebus and Apollonius, came from Athens to Rome to study. They found a tutor named Craton, and lived in his home. Craton’s son Cherimon fell grievously ill, and his spine was so contorted that his head was bent down to his knees. Craton asked Bishop Valentine to help his sick son.
The holy bishop went into the sick child’s room and prayed fervently all night. When day came, the happy parents saw their son had been healed. They believed in Christ and were baptized with all their household. 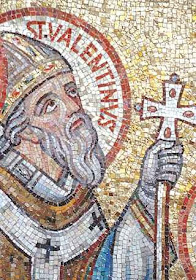 Craton’s students, Proculus, Ephebus and Apollonius were also baptized and became devoted disciples of Saint Valentine. The bishop’s fame quickly spread, and many were converted to Christ. Among them was the city prefect’s son, Abundius, who openly confessed himself a Christian. This was a bold thing to do, since paganism prevailed in the world, and Christianity was persecuted.
The wrath of the prefect and other city leaders fell upon Bishop Valentine, the teacher of the youths. They demanded that he renounce Christ and worship the idols.

After much torture they threw him into prison, where his followers visited him. Learning of this, the prefect gave orders to take Valentine out of the prison and behead him. Saint Valentine’s students Proculus, Ephebus, and Apollonius took the body of their teacher and carried it outside the city walls of Interamnum, where they buried it along the Via Flaminia.
Both believers and pagans were drawn to them, and they converted many idolaters to the true faith. When the authorities heard about this, they arrested the youths and threw them in prison. Fearing that people might break the sufferers out of prison, the executioners beheaded them by night.

Abundius, learning that his friends had been locked in prison, hastened to see them, but found that they had already been executed. He buried their bodies near the grave of holy Bishop Valentine. Many years later the Basilica San Valentino of Terni was built on top of this cemetery.
Notes:
* In the West, St. Valentine is celebrated on February 14th, according to the Roman Martyrology. In the East, specifically the Slavic Churches, St. Valentine the Presbyter of Rome is celebrated on July 6th, while St. Valentine the Bishop of Terni is celebrated on July 30th. Often the two are assumed to be one man, though the details of their lives come from later sources. Notwithstanding, because of the relative obscurity of these two Saints in the East and since there is no commemoration of St. Valentine in the Greek Orthodox Church, members of the Greek Orthodox Church named Valentinos (male) or Valentina (female) may observe their name day on the Western ecclesiastical calendar date of February 14th.