Verses
You were a gift of God thrice-blessed Theodore,
As one who is great you gave much to Edessa.
Our Holy Father Theodore was born in the Mesopotamian city of Edessa and lived during the ninth century. His parents, Symeon and Maria, who were pious Christians, had given birth to a daughter but also desired a son, for which they prayed. One night both had the same vision of Saints Theodore and Paul the Apostle, telling them that they would indeed be granted a son. At the age of two he was baptized by the Archbishop and given the name Theodore, which means "gift of God." At the age of five, his parents began his schooling, but he had great difficulty grasping his lessons, and for this his parents reproached him, and his teacher even struck him.
One day, during a Divine Liturgy served by the Archbishop, young Theodore hid underneath the Holy Altar and fell asleep. As he slept, he beheld a vision of a young child who gave him a honey comb. Then he told Theodore to become a monk and he gave him a staff. Theodore then fell at the child's feet and asked for his blessing that he may learn Holy Scripture. As soon as he received the blessing, Theodore awoke and came out from under the Holy Altar. The Archbishop asked him what he had been doing, and Theodore disclosed his vision. By this he had understood that the child was Christ Himself, and by giving him a staff He foretold that one day he would be a bishop. For this reason the Archbishop immediately ordained him a Reader. From that moment Theodore progressed in his lessons and excelled in his learning of Holy Scripture as well as grammar, rhetoric and philosophy. 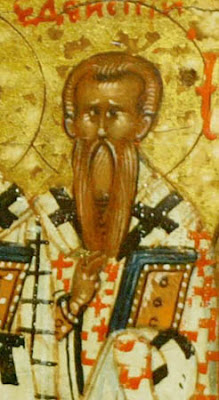 When Theodore was eighteen, his parents reposed. The young man distributed all of his inheritance to the poor, but gave a portion to his sister (who was the mother of Basil of Edessa, the author of the Life of Theodore), and kept nothing for himself. Then he decided to visit the Holy Land on a pilgrimage, in order to venerate the Holy Sepulchre and the holy places there. He also intended to fulfill his calling to become a monk.
While in Jerusalem, he entered and was tonsured at the Lavra of the Saint Savvas the Sanctified. After twelve years of fervent monastic obedience and then another twenty-four years of full seclusion and great abstinence, the Lord called the valiant ascetic to be a bishop. After the death of the Bishop of Edessa, no worthier successor was found than Theodore, and with the mutual consent of the Patriarchs of Antioch and Jerusalem, and of the clergy and laity, he was chosen bishop.
It was not easy for Saint Theodore to forsake his solitude, but he submitted himself to the will of God and undertook his pastoral guidance of the Church of Edessa. This occurred during the reign of the Roman Emperor Michael and his mother Theodora (842-855). At the time of Saint Theodore’s episcopal consecration, there occurred a great miracle. The people beheld a dove, white as snow, flying about beneath the cupola of the church, which then illuminated upon the head of the newly-made bishop. 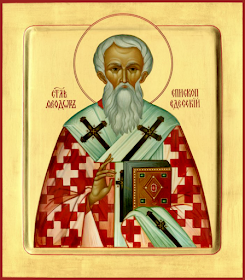 Saint Theodore devoted all his abilities to the governance of his flock. He was a model for the faithful in word, in life, in love. By the good example of his holy ascetic life, he guided the flock entrusted to him by God, onto the path of salvation. Theodore exerted much effort in the struggle with heretics, namely the Nestorians, Eutychians, and Manicheans and with a firm hand he guarded the Church from temptations and false teachings. By his consolation and support for Saint Theodore, the clairvoyant Elder Theodosios the Stylite also served the spiritual community while laboring in asceticism not far from the city, near the Monastery of the Holy Great Martyr George.
With the blessing of the Elder, Saint Theodore journeyed to Baghdad to the caliph Mavias (Muawid, one of the three sons of the Umayyad caliph Mutawakkil, who reigned in the years 847-861) who was a Muslim to complain about unjust measures against the Orthodox Christians by the heretics. Having come to Mavias, the Saint found him seriously ill. Calling on the help of the Lord, the holy bishop threw a bit of earth from the Sepulchre of the Lord into a vessel of water and gave it to the caliph to drink, and the sick one was healed. The grateful Mavias, favorably disposed towards the Saint, happily heard his teachings. Finally, together with three close associates, he accepted holy Baptism with the name John.

Shortly afterwards for his open confession of faith in Christ before the Muslims, the caliph John was killed with his three associates. Having appeared in a dream simultaneously to Saint Theodore and to Theodosios the Stylite, he said that he had been granted to suffer for Christ, and was numbered among the ranks of the Martyrs. He promised that soon he would meet them in the Kingdom of Heaven. This was an indication to the Saint of God that his own end was approaching. For this reason he visitd and venerated the holy places of Jerusalem, and returned to the Lavra of Saint Svvas. In 848, again in solitude at the Lavra of Saint Savvas the Sanctified, he peacefully departed to the Lord.
Saint Theodore has left Christians his edifying writings which are contained in the Philokalia, titled One Hundred Exceedingly Edifying Texts and Theoretikon. Saint Nikodemos the Hagiorite writes of these works that they "abundantly offer to the attentive reader the fruit of holy wakefulness and of spiritual usefulness. So, you that desire your salvation, come and take your fill!" The Life of Saint Theodore of Edessa was popular reading in Russia during the sixteenth and seventeenth centuries, and was preserved in many manuscripts. In the Slavic Churches he is commemorated on July 9th, while in the Greek Church he is commemorated on July 19th. 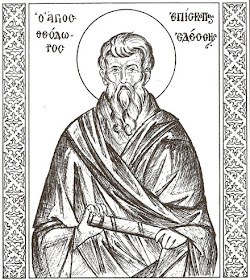 Apolytikion in Plagal of the Fourth Tone
You are a guide of Orthodoxy, a teacher of piety and modesty, a luminary of the world, the God-inspired pride of monastics. O wise Theodore, you have enlightened everyone by your teachings. You are the harp of the Spirit. Intercede to Christ our God for the salvation of our souls.
Kontakion in the Third Tone
From the blessed Edessa, thou wentest forth to the desert, but thou wast called back again to tend Christ's sheep as their shepherd; driving off the wolves of error with thy true doctrines, thou didst make a heathen king a Martyr of Jesus. Hence, O Theodore, we honour thy blest remembrance, O holy Hierarch of Christ.