Verses
Oraiozele was cast into the fire O Word,
Who gushes forth a spring of miracles for all.
Saint Oraiozele lived in the first century, though nothing is known of where she was born or her youth. All we know is that her parents were Greek pagans who worshiped idols.
It happened that one day she heard the Apostle Andrew preaching the gospel, and by his message she was moved to forsake paganism and embrace the faith of Christ. Thus around the year 52 she was baptized by the Apostle Andrew.
After being illumined, Oraiozele went to a place called Great Reuma at the Bosporus, where later a church dedicated to the Archangel Michael was built. There she dedicated her life to acquiring the virtues befitting a Christian, and at the same time shared the gospel of Christ with the pagans. Eventually two virgins followed her example and became her disciples. 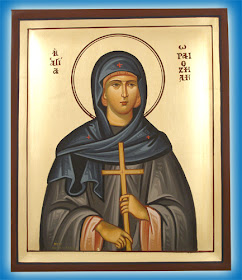 During the reign of Domitian (81-96), a persecution rose against the Christians. Oraiozele, after bidding farewell to her two sisters in Christ, presented herself before Domitian. Because she boldly confessed her Christian faith, the emperor became enraged and handed her over to torture.
After being undressed she was beaten for many hours. The bystanders were astonished by her endurance and many embraced her Christian faith. During her torments, the emperor became blinded for an unknown reason. He therefore had Oraiozele imprisoned and he was led by one of the scribes to the palace. From prison Oraiozele sent the emperor a message, that unless he anointed his eyes with the blood from her decapitated head, he would in no wise receive back his vision. 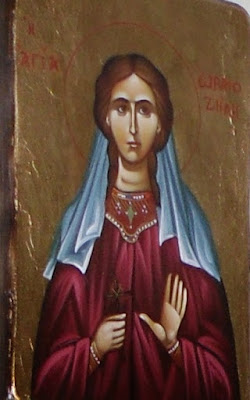 Therefore, Domitian immediately gave an order for the Saint to be beheaded. Then the miserable emperor took the blood from her decapitated head and anointed his eyes with it, and his eyesight was restored. Ungrateful for his healing, the emperor then ordered that the body of the Saint be burned.
A church was later built in Constantinople in her honor, located near the Church of Saint Anastasia the Great Martyr. At her shrine, many were healed of diverse diseases. Among the many healed was a paralytic who was brought to her church. After being anointed, he was restored whole. Moreover, she helped barren women to conceive that sought her aid before her holy relics, and those mothers unable to produce breast milk she helped by restoring their ability to nurse their infants.
John at 1:55:00 PM
Share
‹
›
Home
View web version