Verses
Hermippos, Hermolaos and Hermokrates,
You boldly shamed those who revered Hermes.
On the twenty-sixth Hermolaos was beheaded.
+ + +
The beginning of the names of these Martyrs,
Indicates their common end by the sword.
On the twenty-sixth Hermolaos was cut at the neck by a sword.
The Holy Hieromartyrs Hermolaos, Hermippos and Hermokrates of Nicomedia, were priests who were among the small number of those remaining alive after 20,000 Christians were burned alive in a church at Nicomedia in the year 305 (Dec. 28), on the orders of the emperor Maximian (284-305). They went into hiding in a certain house and did not cease to preach Christianity to the pagans.

The young pagan named Pantoleon often passed by the house in which Hermolaos had concealed himself. Once Hermolaos chanced to meet the youth and asked him to stop by his house. In their conversation Hermolaos began to explain to his guest the falseness, impiety and vanity of worshiping the pagan gods. From that day on, Pantoleon began to visit Hermolaos daily and eventually received Holy Baptism from him. Upon being baptized Pantoleon was renamed Panteleimon (July 27). 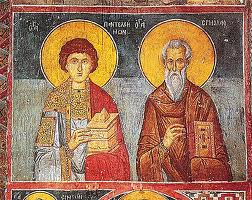 When the trial of the Holy Great Martyr Panteleimon was being held, he was asked from whom he had learned the Christian faith. Panteleimon responded that it was through the priest Hermolaos. Maximian therefore had Hermolaos arrested. The Lord Jesus Christ appeared to Hermolaos one evening and revealed to him that on the following day he would suffer for Him and receive a martyr’s crown. 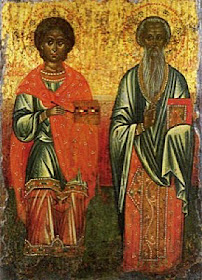 Hermippos and Hermokrates were arrested and brought to trial after Hermolaos. All three clerics were given the chance to deny Christ and offer sacrifice to the idols. But they resolutely refused, confessed their faith in the Lord Jesus Christ and were prepared gladly to die for Him. 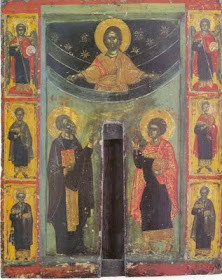 The pagans began to threaten them with torture and death. Suddenly, a strong earthquake occurred, and the idols and pagan temple collapsed and shattered. This was reported to the emperor. The enraged Maximian gave the Holy Hieromartyrs over to torture and pronounced upon them a sentence of death. Bravely enduring all the torments, the Holy Hieromartyrs Hermolaos, Hermippos and Hermokrates were beheaded in about the year 305, and victoriously entered the Kingdom of Heaven. 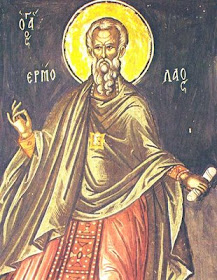 Apolytikion in the Third Tone
You faithfully served the Lord as true priests, O Saints, and joyfully followed the path of martyrdom. O Hermolaos, Hermippos and Hermokrates, three-pillared foundation of the Church, pray unceasingly that we may be preserved from harm.

Kontakion in the Fourth Tone
As a godly priest thou didst receive the crown of martyrdom: for as a good shepherd of Christ's flock thou didst prevent the sacrifice of idols. Thou wast a wise teacher of Panteleimon, and we praise and venerate thee, crying: Deliver us from harm by thy prayers, O Father Hermolaos.