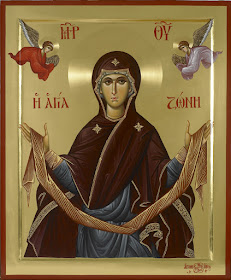 On the thirty-first of this month [August], we commemorate the deposition of the Honorable Zoni* in the Holy Coffin, of our Most Holy Lady the Theotokos, in her revered home which is in Chalkoprateia, returned from the Diocese of Zela during the reign of Emperor Justinian in the year 530, and the miracle that happened at the deposition of this Honorable Zoni to Empress Zoe, the wife of the famously reigned Leo the most-wise emperor, in the year 886.
Verses
Like an all-golden garland, O august Virgin,
I set your Girdle on the year’s end as adornment.
On the thirty-first, they enshrined the Girdle of the All-Pure One.
Emperor Arkadios, the son of Emperor Theodosius, who reigned in 395, sent for and brought from Jerusalem to Constantinople the Honorable Zoni of the Most Holy Theotokos, which was kept there together with the Honorable Robe of the Theotokos by a virgin woman.** Having brought it to Constantinople, he placed it in a splendid case, which he called Holy Coffin. 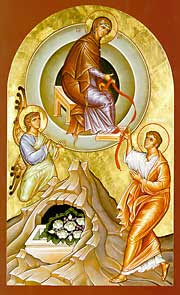 After four hundred and ten years, Emperor Leo the Wise (886-912) opened this Holy Coffin, on behalf of his wife Empress Zoe, who was disturbed by an unclean spirit. For she had seen a vision, that if the Honorable Zoni of the Theotokos were placed on her, she would be freed from the demon. Therefore, when the case of the Holy Coffin was opened, the Honorable Zoni of the Theotokos was found to be shining. Opening this which was woven by God, it had a golden bull, with a short message, which revealed the exact year and indiction and day the Holy Zoni was brought to Constantinople, and how it was placed in the case by the hands of Emperor Arkadios, and it was sealed by him. Hence after the emperor venerated and kissed it, the Patriarch laid it over the suffering empress, and - O the miracle! - immediately the empress was freed from the demon. Wherefore everyone glorified Christ our God and Savior, and thanked His all-immaculate Mother, and once again placed the Honorable Zoni in the Holy Coffin, namely the case, in which it was before.*** 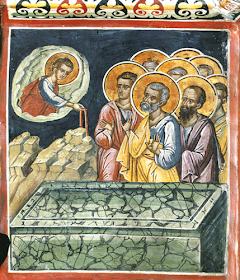 Notes:
* Zoni can be variously translated into English as "belt" or "girdle;" properly it is the lower girdle worn by women above the hips and under the breasts.
** There seems to be a discrepancy here, as we have been previously told that it was brought from the Diocese of Zela in Pontus to Constantinople during the reign of Justinian. According to Saint Nikodemos the Hagiorite, he believes Emperor Arkadios brought the Zoni from the Diocese of Zela to Constantinople, not from Jerusalem. There seems to be confusion between the story of the Robe and Zoni of the Theotokos here. This explanation is substantiated by the Golden Bull found by Emperor Leo. However, in the Synaxarion of Constantinople it also says that a commemoration was made on April 12th, on which was celebrated the translation of the Zoni from the Diocese of Zela to Constantinople in the year 919, during the reign of Constantine and Romanos Porphyrogennetos. This only adds to the confusion, and requires a critical examination by historians. If all is to be considered somewhat trustworthy, perhaps Arkadios brought it from Jerusalem to Constantinople, then from Constantinople it was brought to the Diocese of Zela but returned to Constantinople during the reign of Justinian. Then it may have been brought to the Diocese of Zela once again and Leo either opened it there or in Constantinople to which it was returned again, then a few years later during the reign of the Constantine and Romanos it was returned to Constantinople again. Though this is possible, it seems unlikely. The other possible explanation is that these could only be portions of the divided Zoni.
It should be noted that the Church of the Theotokos in Chalkoprateia was built by the Emperor Justin II (565–578) and his wife Sophia. Also, Empress Pulcheria, out of her great reverence and love for the Theotokos, added a golden cord to the Zoni, which can still be seen today at Vatopaidi Monastery where the Zoni is kept. George Logothetis says that in the reign of Emperor Isaac II Angelos (1185-1195) he took with him the Royal Cross (which was made by Emperor Constantine the Great and held a piece of the True Cross to be carried into battle) which contained a portion of the Honorable Zoni and a Piece of the True Cross to battle with him against the Bulgarians. Having lost the battle, the Royal Cross with the Honorable Zoni and the True Cross were taken by the Bulgarians, after they saw a priest toss them into a river to escape being taken by the Bulgarians. 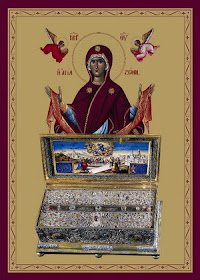 *** Eventually the Honorable Zoni was divided up into portions and distributed throughout the shrines of Constantinople. During the Fourth Crusade and the capture of Constantinople in 1204, portions were taken by Crusaders to the West. At least one portion remained in Constantinople, and when it was recovered by Michael VIII Palaiologos (1259–1282) it was kept in the Church of the Theotokos at Blachernae. The last time we hear about it before the fall of Constantinople is by an anonymous Russian traveler who saw it there in 1424. It is unknown what happened to this portion following the fall of Constantinople in 1453.
As for how the Honorable Zoni arrived at Vatopaidi Monastery, where it remains today, we are told the following. After the portion of the Zoni was taken with the Royal Cross and True Cross by the Bulgarians, it apparently was taken with them into battle. In a particular battle against Prince Lazarus of Serbia (1371-1389), the Bulgarians lost and the Royal Cross was recovered. Prince Lazarus gave the Royal Cross with the Honorable Zoni as a gift to Vatopaidi Monastery. To this day behind the Cross can be read the following inscription: "Lazarus, prince of Serbia in Christ God, emperor of the Greeks, imparts the mighty weapon with the immaculate Zoni of my Panagia, to the Monastery of Vatopaidi in my empire, in 1101." However, the fathers of Vatopaidi also hold a tradition which says that Emperor John VI Kantakouzenos (1341-1354), when he abandoned his office he became a monk with the name of Joasaph at Vatopaidi Monastery, and he was the one who gifted the Zoni to the Monastery. 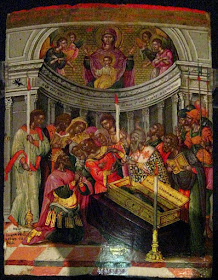 Apolytikion in Plagal of the Fourth Tone
O Ever-Virgin Mother of God, shelter of mankind, thou hast given a powerful legacy to thy people, thine immaculate body's tunic and girdle which remain incorrupt through thy pure childbirth. For in thee time and nature are renewed, and we implore thee to obtain peace for the world and great mercy for our souls.
Kontakion in the Second Tone
Thy precious girdle, O Mother of God, which encircled the womb that held God, is an invincible strength for thy flock, and an unfailing treasury of grace, O Ever-Virgin Mother.