5 Testified Miracles of the Holy Zoni of the Theotokos 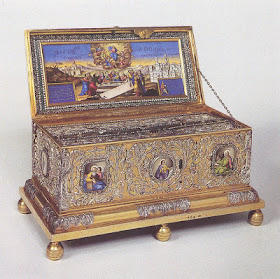 1. The Healing of Elder Philotheos Zervakos
The blessed Elder Philotheos Zervakos describes how he was cured of unbearable pains which caused him constant headaches. Here is how he recounts the event.
We came to the Monastery of Vatopaidi on the 31st of July. We entered the Archontarikion where we were shown hospitality, but because of my unbearable pains I was unable to endure. After a short time passed, my headache was so painful that it radiated around both sides of my head. We asked the Archontaris to take me to the doctor, until he could give me drugs to stop the headache. Descending from the pharmacy, we passed by the church which fortunately was open. Entering inside in the Holy Sanctuary they opened the holy relics and a Hierodeacon from Iconium venerated them. I came and began to venerate with reverence first the Cross and the icon of the Vimatarissa. Next I venerated a portion of the Honorable Cross. Similarly I venerated the Holy Zoni, and I was feeling that I, the wretched and deplorable one, was venerating the Honorable Zoni which in life embraced the All-Pure Theotokos, and as I embraced the Holy Zoni with fervent reverence and tears, I felt — O the miracle! — that my sickness had left me and I was found totally healed! How great and awesome are your miracles, O All-hymned Lady! Let Your name be greatly-glorified and greatly-hymned, for you do not cease to grant our requests of healing of soul and body. Exiting the Holy Sanctuary I was in the middle of the church speechless and said how I was before and how immediately and completely I was healed.
2. Elder Paisios Recounts a Miracle of the Holy Zoni
The following is from a conversation in the book Counsels of Elder Paisios of the Holy Mountain: With Pain and Love for Contemporary Man, in which a nun was complaining of a caterpillar to Elder Paisios.
- "Did your spread pesticide?"
- "I did spread, Elder."
- "How many nuns and you can’t even kill a caterpillar. During the Occupation [by the Germans in WWII], when the locusts descended, they had brought to Halkidiki the Holy Zoni from the Monastery of Vatopaidi, and the locusts fell in swarms into the sea."
3. Difficulty Having Children
Father Theotimos is from the Congo. He studied theology in Greece. He had problems with having children, and he so much wanted and asked for a ribbon blssed by the Honorable Zoni. The result he described himself.
December 3, 1995
Methoni 23, Athens
May the name of the God-man Christ always be glorified and may the name of the Panagia Lady Theotokos be honored, who is the mother of the world.
We wore the Holy Zoni in March 1992. In May 1992 my wife became pregnant and gave birth by Cesarean section to a a boy weighing 2,900 grams. We baptized him with the name of the Panagia, Mario. The doctors had confirmed that it would be difficult for us to have children.
In April 1995 my wife was in her eighth month of pregnancy and there was presented a problem. They had to do a Cesarean section, to get the child prematurely. My wife wore the Holy Zoni for two days before surgery. The baby, a girl, who was previously 1400 grams was born double the weight.
Fr. Theotimos and Evangelia Tsalas
Note: An incredible number of miracles occur for couples who have trouble bearing children. The tradition alluded to above is that the fathers of Vatopedi take ribbons that have been blessed on the Holy Zoni of the Theotokos and give them to people to wear as a blessing. Many healings, and especially with respect to the bearing of children result for those who then wear these ribbons with reverence, prayer and faith.
4. 2 Miracles of the Holy Zoni in America
Panagiotis Callas, who lives in Florida, during his visit to Vatopaidi Monastery, lodged in writing the following facts.
A. In September 2001 I was eating with some friends. A man reported that his daughter was sick with a cancerous tumor on the heart and was pregnant. The doctors wanted to remove the tumor, but she would lose the baby. If she would give birth in the ninth month, his daughter could die from the tumor. I gave the man a ribbon from the Holy Zoni, and holy oil from the miraculous icons of Vatopaidi Monastery, and an icon of Panagia Pantanassa which heals cancer. This man flew from Miami to New York and visited his daughter. He tied the ribbon around her hand and anointed her with the holy oil on her stomach and placed the icon in the same place. The child was born normally and was healthy. The mother’s tumor had disappeared totally without surgery.
B. In April 2002 the uncle of my son’s wife was in the hospital with liver cancer. They gave him no hope, and his vital signs were weak. They asked the priest to read the prayers for the departure of the soul [the prayers read at the hour of death]. My daughter sent to her uncle a piece of the ribbon from the Holy Zoni. The ribbon arrived at his house. The person who picked up the mail from his house brought the sealed envelope to the hospital. As soon as the envelope entered his room, immediately he started to feel better. When he opened the envelope, without knowing yet what it contained, immediately he began to feel better. When he touched the blessed ribbon, he became a lot better and was able to go home. The hospital staff who had declared him incurable, could not believe it. Today her uncle lives and no longer has cancer.