Verses
In his raiment, revered Euplos was a Levite,
In his beheading, a firm soldier.
On the eleventh Euplos was struck with the sword.
Euplos (Euplus, Euplius) was a deacon in Catania, Sicily. Emperor Diocletian (284-305) ordered the governor Calvisianus in Sicily to exterminate any Christians he found there. Calvisianus did not find a single Christian, for the few that were there, hid from the persecutor and did not reveal themselves. Then someone accused Euplos of taking a book to secret Christians and reading to them. This book was the Holy Gospel.
They soon brought Euplos to court, hung that book around his neck and led him to prison. When the governor asked the Saint to read from the book, he had him imprisoned for being a Christian. The Lord made a spring of water flow into the prison for the Martyr to quench his thirst, after seven days of thirst and hunger during which time Euplos spent in prayer. Then he was handed over for torture.
They first tied his hands, feet and knees and hung him on wooden pole, where they tore at his skin with iron claws. During this a divine voice came to him and strengthened him. Then with an iron hammer they struck him in the legs and threw him back into prison. While they were beating him with iron rods, Euplos, mockingly said to the torturing judge: "O ignorant one, do you not see that because of God's help, these tortures are for me as a cobweb? If you can, find other harsher tortures, for all of these are as toys." The judge therefore commanded that the Saint’s ears be torn off, and that he be beheaded.
Finally, they led the Martyr of Christ out to the scaffold with the Gospel hanging around his neck. Then Saint Euplos opened the Holy Gospel and read from it to the people for a long time. Many converted to the faith of Christ. Saint Euplos was beheaded in the year 304 and took up habitation in the Kingdom of Heaven.

His holy relics are in the village of Vico della Batonia, near Naples. A portion of his skull is in the Metropolis of Polyani and Kilkis. A portion of his right hand is in the Church of the Dormition of the Theotokos in Nea Mesimvria. Other portions of his relics are in the Athonite Monasteries of Docheiariou and Pantocratoros.
With Saint Agatha, he is a co-patron of Catania in Sicily. He is also the patron saint of Francavilla di Sicilia and Trevico. Ruins of the old Church of Saint Euplius are located in Catania near Piazza Stesicoro. This urban site coincides with the place of his martyrdom.
His name in Greek means "good sailing" which is played upon in the text of the Orthodox Christian Vespers service in his honor. At the port of Alexandroupolis in Greece, a small church was built to Saint Euplos in 1997 by Thracian emigrants, to commemorate a church in Ainos, Thrace dedicated to Saint Euplos, where he was patron, which was built before 1000 A.D. This was because Ainos had a significant naval presence, and even in the Greek Revolution of 1821 had 300 ships stationed at its port. The port presence of these churches to Saint Euplos therefore are shrines for the "good sailing" of ships that depart from there. 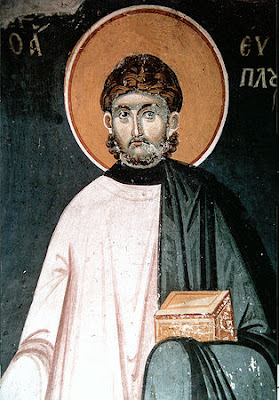 Apolytikion in the Fourth Tone
As a holy deacon, a righteous minister of the Church of Christ, thou didst contend superbly. Thou didst sail over the sea of many torments and afflictions, O all-blessed Euplos. Guide us into the haven of heaven.
Kontakion in the First Tone
Thou didst bear in thy hands the law of Christ, and cry to thine enemies in the stadium: I am coming willingly to contest most steadfastly. Then thou didst gladly finish thy course by bending thy neck to the sword. 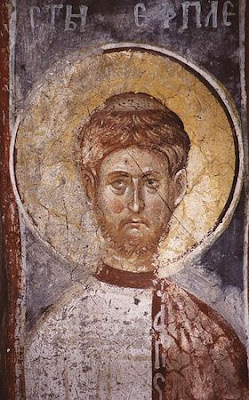 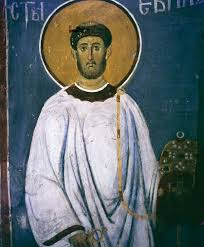 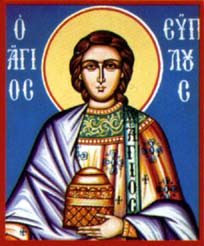 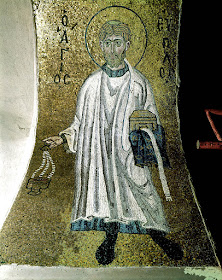 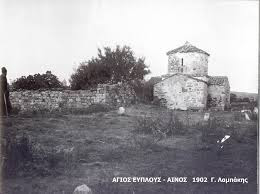 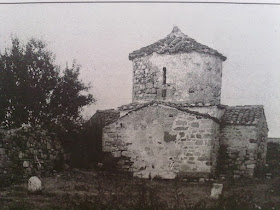 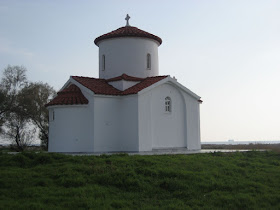