Despair and Hope in the Great Supplication to the Theotokos 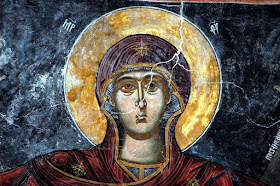 By Protopresbyter Fr. Thomas Bambinis
August is the month of the Panagia, a month rich in hymnographic material to the Mother of God, in which one can see depicted the theology of our Church, as well as the life and suffering of the world. We celebrate the Panagia, the cause of joy, out of whose heart came the sword of the cross. Saint Nikodemos the Hagiorite, summarizing the teachings of the Holy Fathers, writes: "The entire invisible and sensible world was made for this end, namely the Lady Theotokos." This is why Joseph Bryennios, "the wise and most theological," according to Saint Nikodemos, calls her the "flower" of all creation, and writes: "Of our entire race and every tribe of people, from all ages and at all times, the Lady Theotokos is the flower, and her most beautiful fruit is her only-begotten Son (according to His humanity)."
The character of the hymnography of August - most especially of the first fifteen days - is the connection between theology and the suffering of the world, the struggle with daily problems, physical and mental illness, and the temptations of demons. There is the paradoxical connection of despair and hope, which is achieved in the atmosphere of faith and the theology of the Church. This is done mainly in the known Services of the Small and Great Supplications (Paraklesis).
I would more specifically like to refer to the Great Supplication and its poet, which is usually chanted only during the Dormition period, while the Small could be chanted on any occasion throughout the year. 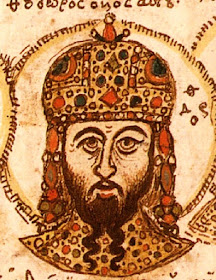 The Great Supplication is a poem that expresses the heart of our race. Its poet is the Emperor of Nicaea, Theodore Doukas Laskaris (1222-1258).
Theodore Doukas Laskaris lived in a very critical time of the Eastern Roman Empire from a military, political and cultural point of view. Already in 1204 the Franks had occupied Constantinople. The Bulgarians had expansionist designs in the regions of Macedonia and Thrace. The borders of the Empire of Nicaea in Asia Minor with the Sultan of Iconium and the possessions of the Franks were in need of attention and supervision. Also, the thought to seek help from the Pope, with some "theological" return, in order to bring about the recapture of Constantinople, was a strong temptation for the faith.
In the four-year reign of Theodore, despite his young age (he died at 36 years old), he showed excellent leadership. He managed to combine strong and successful military action with forward-looking social policy. On the field, as well as in education, he showed great practical interest, having founded libraries and schools. And in all this, he showed remarkable literary output; he wrote philosophical and theological studies. He was among the wisest men of his time. His great wisdom, however, not only related to the development and refinement of the intellect, but also the psychological and spiritual maturation of man, which is seen in the Canon of the Great Supplication.
We can observe this at three points:
First, the strong leader did not hesitate to express his weakness and despair, and to put it on the lips of his people as a hymn and prayer addressed before the Theotokos.

"Mighty storms of misfortunes, O Lady, pass over me; and the swelling waves of afflictions plunge me into the depths. But be thou quick to come; lend me thy helping hand, Maiden, for thou art my fervent protectress and sure support."

Second, his despair for himself and all people is radical. He realized he could hope in nothing that was created.

"At a loss and despairing, I cry with pain unto thee: Hasten, O thou fervent protection; grant thou thy help to me, who am thy lowly slave and wretched servant, O Maiden; for with heartfelt fervor I come seeking for thine aid."

"Where else shall I find me another to be my help? To what refuge shall I hasten to be saved? Whose fervent aid shall I have in need? Alas, I am shaken by life’s affliction and turbulence. In thee alone, O Maiden, do I hope, trust, and glory; and I run to thy shelter; do thou save me."

The "turmoils of life" are associated with a sense of inner darkness. Sorrows are not always external; there are also internal clouds.

"The storm clouds of grievous sorrows and distress shroud my hapless heart and soul in affliction, and with their gloom have they filled me, O Virgin. Yet since thou brought forth the Light Unapproachable, be quick to drive them far from me with the breeze of thy holy entreaties, Maiden."

He understands the core of the evil that is inner darkness, which imprisons the soul in the cares of life and allows thoughts to pierce the soul like arrows.

"The turmoils of this life encircle me like unto bees about a honeycomb, O Virgin, and they have seized and now hold my heart captive, and I am pierced with the stings of afflictions, Maiden; yet be thou, O all-holy one, my defender and helper and rescuer."

"I profess thee, O Lady, as the true Mother of God: thee, who hast both banished and triumphed over the might of death; for as the source of Life, thou hast freed me from Hades’ bonds, raising me to life, though to earth was I fallen down."

"Rejoice, fiery throne of the Lord God; rejoice, thou sacred vessel that art filled with manna; rejoice, thou golden lampstand and unquenchable lamp; rejoice, O glory of virgins and thou boast and adornment of mothers."

She is the mother and virgin who became a fiery throne of the Lord, "giving birth to the light," as another hymns says, which is why she can brighten those "darkened by the night of sin."
This is the ethos and spirituality of Emperor Theodore Doukas Laskaris of Nicaea, as well as the cultural core of the Eastern Roman Empire. At the center of Eastern Romiosini is Theology, which included the correct wording of the faith and the ascetic method of treating the human soul. It was dominated by the fertile connection of the despair of all humanity, with ultimate hope in God and the intercessions of the Theotokos and the Saints. This spirit is still alive today among Orthodox people, but it is not in the forefront. The forefront of development is dominated by the proud minds of scientists and technocrats. The center of political and social life is the economy and socio-political systems and the treatment of the "uncomfortable" soul through psychoanalysis, which, according to Metropolitan Hierotheos of Nafpaktos and Agiou Vlasiou, has no ontology for the soul.
Source: Ekklesiastiki Paremvasi, "Απόγνωση και ελπίδα", August 1998. Translated by John Sanidopoulos.
John at 5:24:00 PM
Share
‹
›
Home
View web version