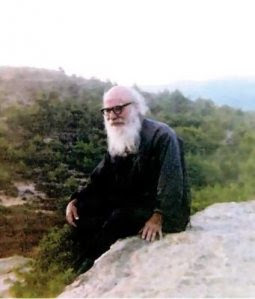 St. Porphyrios (+ 1991) had great admiration for St. Augustine through a work attributed to him called the Kekragarion. In fact, this text is not a work of Augustine, but it is a medieval text of unknown origin or authorship inspired by the writings of Augustine, particularly his Confessions. This text was therefore ascribed to Augustine in the West (where it is known as the Meditations of Saint Augustine) and often confused with his actual Confessions by many Greeks, after it was first translated into Greek by Eugenios Voulgaris in the 18th century, and reworked and republished by St. Nektarios of Pentapolis. Because of this text, many Greeks since the 18th century have held St. Augustine in high esteem, as did St. Porphyrios from the conversation recorded below.
When you feel what you read, you will cultivate divine eros. This is the meaning of study. Read the Kekragarion, which is all divine eros. I read it and I weep. What beautiful words, the depth they have! Read such things, and you will delight in them. In this way you will obtain divine eros. Bring the Kekragarion, to read it to me:

"O the invisible light, with which becomes visible the abyss of the human heart."

"You are the truth, O Word, by Whom all things were made, and without Whom nothing would come to be."

"You, Word, Who said then in the beginning, 'Let there be light! and there was light.' May it be my light. May I see this light, and recognize everything that is not light."

Just like the holy Augustine, so also you ought to think about God Almighty, Who moved above the darkness and said, "Let there be light! and there was light."
Say with divine eros and enthusiasm:
"Glory to You Who has shown us the light. Glory to God in the Highest, and on earth peace to men of good pleasure. We praise You, we bless You, we venerate You, we glorify You, we thank You for Your great glory."
My, my, what the Doxology has to say to us. Great is the Doxology, a great thing, the most beautiful prayer! My God, we Your humble and unworthy vile servants, may we praise You and glorify You. However, Your great goodness is valued in this joy.
You who are praised by angels, archangels, principalities, authorities, seraphim and cherubim and all the heavenly powers of angels and archangels.
"See what great love the Father has lavished on us, that we should be called children of God! And that is what we are! The reason the world does not know us is that it did not know Him. Beloved, now we are children of God, and what we will be has not yet been made known. But we know that when Christ appears, we shall be like Him, for we shall see Him as He is" (1 Jn. 3:1-2).
Read to me now what the holy Augustine says about divine grace:

"I see well that everything is Your gift, and how without You we cannot do anything. For if You, Lord, do not guard each city, in vain the guards keep watch."

"For, even if I ever had something good, it was from You I had it. And whatever I have, it is Yours, or I have it because I received it from You."

Do you see how he feels what he writes? Do not think these are words of literature or of empty content. They come from the depths of the heart. Do you see how much repentance and humility he has? This was given by the Lord through repentance. Whatever Augustine says here is not his own. It is from divine grace. It is from Holy Scripture. This is why Augustine had such great wealth. He digested Holy Scripture. Whatever he says here, he says it from there. Tell me the contents.... Read to me from "On Divine Praise":

"It is not we who praise You, but You Yourself, through You and for You. For us You are praise, because then we find true praise, when we have its source in You."

"Because You, the true praise, inspire true praise. And as many times as we seek praise, from anyone else except You, so much I fail to praise You. Because such is impermanent, while that which is from You has an eternal duration."

How beautifully the holy Augustine says it! You, O man, cannot. God says it for you, He Who puts praises and doxologies in your heart, and then you direct it to Him. This is in accordance with Scripture: "We do not know what we ought to pray for, but the Spirit Himself intercedes for us through wordless groans" (Rom. 8:26).
Source: From Λόγοι περί πνευματικής ζωής / Γέροντος Πορφυρίου Καυσοκαλυβίτου. Translated by John Sanidopoulos.
Read also: Saint Nektarios on Saint Augustine of Hippo
John at 3:05:00 PM
Share
‹
›
Home
View web version