The Mystery of Life and Renewal 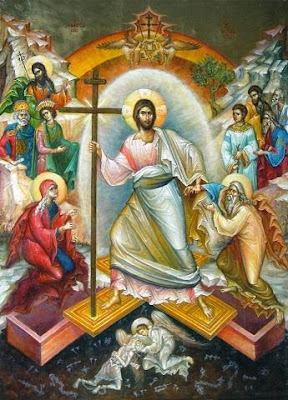 By His Eminence Metropolitan Hierotheos
of Nafpaktos and Agiou Vlasiou
The Church with its festivities is not content to lead people to psychological respite, but it tries to turn their attention to the core tragic problem that concerns them and, of course, to overcome it. The person of the God-man Christ is always at the center of the festivities, and He is at the center of all history and all humanity, negatively and positively. Indeed, He "is the cause for the fall and rising of many in Israel and a sign to be spoken against" (Lk. 2:34).
The Resurrection of Christ especially is a great historical truth, but at the same time it is a great mystery. It is a truth because it took place in a moment of history, "under Pontius Pilate," but it is also a mystery because it is experienced existentially and personally. It is not only an event of an intellectual conception, but an extraordinary experience of overcoming death within the limits of our personal life.
Certainly there exist historical testimonies for the Cross and Resurrection of Christ, because Christ was a historical person, but there exist existential testimonies that Christ is the conqueror of death, since God raised up human nature and conquered the greatest enemy that torments humanity - death. Witnesses of the Resurrection were the Apostles, the Confessors, the Martyrs, the Venerable Ones, the Holy Fathers, men and women who bravely faced their problems in life with hope in the resurrection. It is those who leave this world "with hope in the resurrection to eternal life." All these shed their blood and sacrificed their lives, refusing biological joys and material pleasures. Therefore, the Resurrection of Christ is not an ideology, a worldview, a metaphysic or a mysticism, but it is true life that transforms the entire human existence and overcomes death, mortality and the corruption of nature, and creates a transformation of the person and a renewal of all creation.
With the resurrection of Christ we come out of the prison of the senses and emotions, from the darkness of hell. In the myth of Plato's Cave we clearly see the tragedy of humanity, since we are forced to live chained in a dark cave while observing shadows, but there is also a human tragedy when we come out of the cave and try to help the other chained captives. In the trilogy of Aeschylus - Prometheus Bound, Prometheus Unbound, and Prometheus the Fire-Bringer - we are presented with the image of a struggling man to discover the mysteries of nature, and is punished when he exceeds the limits of human nature, and it seems that his punishment did not last forever. It is essentially about the human adventure, who eventually is subjugated to death and awaits a redeemer.
But Christ is not a superman, but the God-man who liberated humanity from the dark prison of the senses and death, and carried over to us the light of divinity, igniting and illuminating us, making us deified, resurrected. With the God-man, biological life gained perspective and was filled with hope and life.
One approaches Christ in accordance with their internal desire and intention. Some rely on Him to put all their internal anxieties, insecurities and sexual failures, which is strange and dangerous. I see Christ, however, through the ecclesiastical poetry and drama, the exalted iconography, the brilliant writings of the Fathers, the heroic lives of the saints, in the forms of the people as reported by Papadiamantis, through the heroic struggles of Makriyiannis, and not through the Enlightenment views of the previous centuries, and those who mimic them in this "new age". The God-man Christ is our light and life, our hope and our everything.
Source: Ekklesiastiki Paremvasi, "Τὸ μυστήριο τῆς Ζωῆς καὶ τῆς Ἀνακαινίσεως", April 2000. Translated by John Sanidopoulos.
John at 12:27:00 PM
Share
‹
›
Home
View web version