How the Passion of Christ Reversed the Fall of Adam 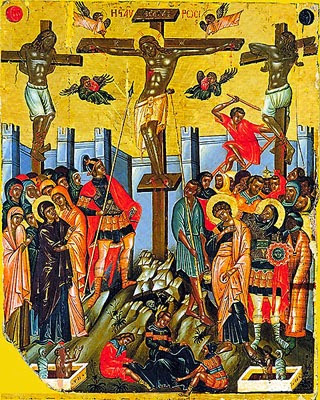 By John Sanidopoulos
- Jesus voluntarily and successfully fasted forty days in the wilderness and overcame the temptations of the devil, because Adam voluntarily yet unsuccessfully kept the God-commanded fast to abstain from the Tree of Knowledge after being tempted by the devil.
- Jesus rebuked Peter as inspired by the devil for trying to dissuade Him from going to Jerusalem to be crucified, because Adam gave in to the suggestion of Eve who was inspired by the devil to eat the forbidden fruit of the Tree of Knowledge.
- Jesus submitted His will to the Father in the Garden of Gethsemane, because in the Garden of Eden Adam disobeyed the will of the Father.
- Jesus was crucified on the wood of a tree, because the fall of Adam took place through a forbidden tree.
- Jesus' hands were pierced with nails, because Adam held the forbidden fruit.
- Jesus was crucified outside the walls of Jerusalem, because Adam was exiled from Eden.
- Jesus accepted curses and became cursed (Deut. 21:23), to reverse the curse of Adam.
- Jesus was naked on the cross and His garment divided among the soldiers, because Adam lost his innocence in Eden and was clothed with animal skin when exiled from Paradise.
- Jesus' mother was at the foot of the cross, because Adam partook of the forbidden tree with Eve who was the mother of the human race.
- Jesus was given vinegar mingled with gall to drink, because Adam ate the forbidden fruit of the Tree of Knowledge.
- Jesus was crucified in between two others who represented the way of life and the way of death, because Adam in Eden was presented with two trees that presented both life and death.
- Jesus unlocked the gates of Paradise for the penitent thief, because Adam shut the gates of Paradise.
- Jesus was stabbed on His side after He died, because after Adam was put in a deep sleep Eve was formed from his side.
"Your life-bearing side, O Christ, overflows like a spring from Eden, watering Your Church, and making it a living paradise; then dividing the glad tidings into the four Gospels, as headwaters, it irrigates the world, gladdening creation, and teaching the Gentiles to venerate Your Kingdom."
(The Beatitudes, Service of the Holy Passion)
"O King and Lord, having slept in the flesh as a mortal, You arose on the third day, raising up Adam from corruption, and abolishing Death. O Pascha of incorruption, the salvation of the world."
(Exaposteilarion, Service of the Resurrection) 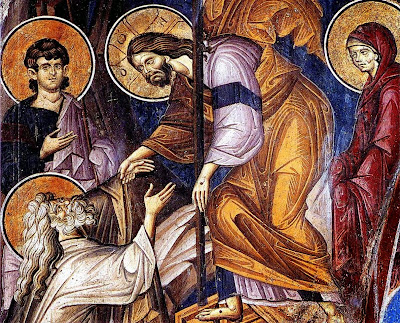