Verses
An image of the immaterial nine orders,
Are the severed heads of the nine men.
On the twenty-eighth the nine were carried off from this mournful life.
The Nine Martyrs of Kyzikos (Cyzicus) were a group of nine martyrs who in the last decades of the third century were martyred in the city of Kyzikos in Asia Minor for upholding their faith in Jesus Christ. They included Thaumasios, Theognes, Roufos, Antipatros, Theostichos, Artemas, Magnos, Theodotos, and Philemon. The Nine Martyrs are commemorated on April 29.
History
While the city of Kyzikos on the coast of the Dardenelles (Hellespont) in Asia Minor had seen the spread of Christianity from the time of St. Paul's preaching, by the end of the third century Kyzikos was still basically a pagan city. During persecutions, some of the Christians fled the city, while others quietly in secret kept their faith in Christ. The situation distressed the Christians in the city who sought to uphold actively the Christian faith. Through these years as the third century ended there were among these Christians nine men: Thaumasios, Theognes, Roufos, Antipatros, Theostichos, Artemas, Magnos, Theodotos, and Philemon.
The nine came from many different places and were of different ages. There were youths like Antipatros and the very elderly like Roufos. They held many different positions in society, including being soldiers, countryfolk, city people, and clergy. They all, however, declared their faith in Christ, and prayed for the propagation of Christianity throughout the countryside. These saints boldly confessed Christ and fearlessly denounced the pagan impiety.
In turn, they were arrested and brought to trial. After the ruler of the city condemned them, they were tortured over several days, then locked in prison before again being brought to the judge before whom they were promised their freedom if they renounced Christ. But, as soldiers for Christ they continued to glorify the Lord. Through the years from 286 to 299 all nine martyrs were beheaded by the sword, and their bodies buried near the city. 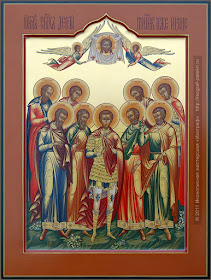 Veneration
In the year 324, after the persecutions against Christians ended under the rule of Constantine the Great, the Christians of Kyzikos removed the incorrupt bodies of the martyrs from their graves and placed them in a church built in their honor. At the church many miracles occurred before the holy relics of the martyrs: the sick were healed, and the mentally deranged were brought to their senses. Through the intercession of the holy martyrs of Kyzikos the faith of Christ grew within the city and many pagans were converted to Christianity.
During the rule of Julian the Apostate from 361 to 363, the pagans of Kyzikos complained that the Christians were destroying pagan temples. Answering the complaints, Julian gave orders for the rebuilding of the pagan temples and jailing of Bishop Eleusios. As Julian's rule ended quickly with his death, Bishop Eleusios was soon set free, and led by the memory of the nine holy martyrs the light of the Christian Faith shined anew.
In Russia in 1678, not far from the city of Kazan, Metropolitan Adrian of Kazan, remembering the suffering of the nine martyrs in Kyzikos and believing that abundance of grace from these saints would dispel the sufferings of the people of Kazan from the feverish and trembling illness that beset the city, proposed building a church in honor of the Nine Martyrs of Kyzikos. In 1691, Metropolitan Adrian approved establishment of a monastery around the church. The Monastery of the Kyzikos Martyrs was built by the hierodeacon Stephen who had brought part of the relics of the saints with him from Palestine.
St. Dimitri of Rostov, who composed the service to the Nine Martyrs, writes, "through the intercession of these saints, abundant grace was given to dispel fevers and trembling sicknesses." St. Dimitri also described the sufferings of the holy martyrs and wrote a sermon for their feast day. 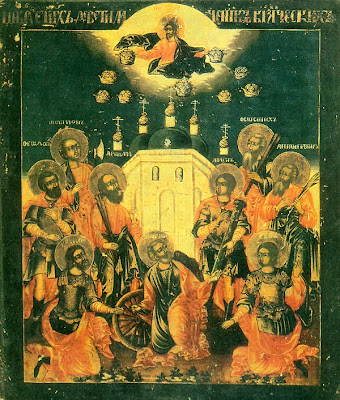 Apolytikion in the Fourth Tone
Your holy nine martyrs of Kyzikos, O Lord, for their sufferings have received incorruptible crowns from You, our God. For strengthened by Your might, they overthrew tyrants and destroyed the powerless boldness of demons. Through their supplications save our souls.
Kontakion in the First Tone
Let us praise the nine-fold choir of martyrs: Renown Theognes, and Antipatros, Magnos and Theostichos, Artemas and Theodotos, Thaumasios, Philemon and Roufos; for they exude divine grace for us from the well-spring of life, our Savior.
Source 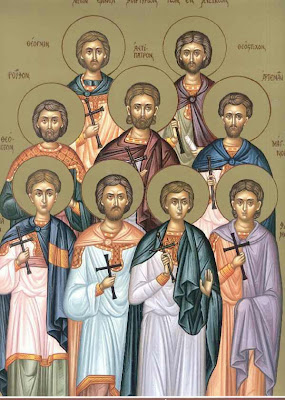 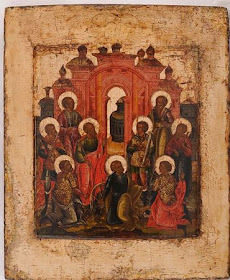 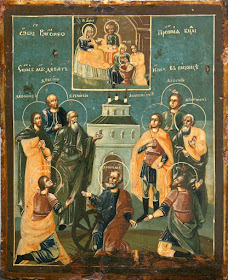 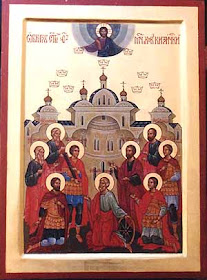 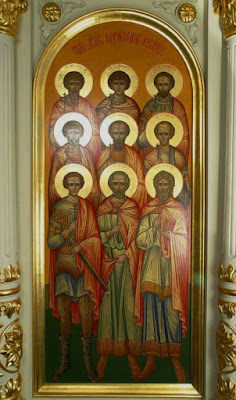 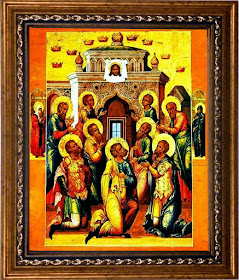 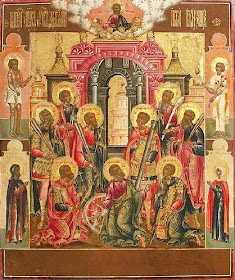