The Inheritance of the Ancestral Sin 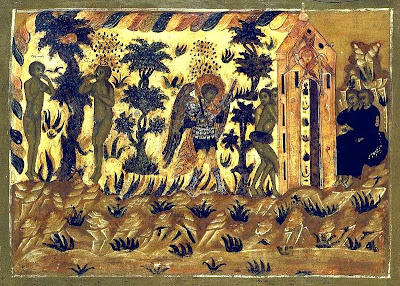 By Archimandrite Maximos Panagiotou,
Holy Monastery of Panagia Paramythia in Rhodes
We did not inherit the guilt of the original ancestral sin, but its consequences. With this, due to our remoteness from God, the entire human race is fallen and is in corruption with the tendency towards evil. This can be given a parallel example: if our natural environment due to our current irrational use of it is irreversibly damaged, the next generations of people will have no responsibility for the evil they were born in, but they will inherit the corruption of nature.
We can observe how largely the character of parents is inherited by their children and grandchildren. Aggression can be inherited, for example, and is manifested even before the infant is exposed to the environment.
The Mystery of Baptism restores us to God, and erases the consequences of the fall, our remoteness from God. However, the tendency towards evil remains, which is why the Church offers us the next Mystery, Chrismation, which is the grace of the Holy Spirit to fight against evil, our passions. These passions developed because we departed from God. After the fall, Adam acquired the fear of responsibility and hatred. He did not take upon himself and account for his part in the fall, but he attributed it to Eve and to God who gave him Eve.
The evil that exists in each of us, exists as a tendency and not an action, it exists with "potential" and not in "activity". Its action depends on us. When we seek the grace of God through prayer and the Mysteries of the Church, we can more easily conquer the evil within us.
Evil is like a seed. If you water it, it will bloom, if not, it will not grow. We all have the seed of evil, even the saints. The saints did not water the seed, they did not create opportunities for sin in their thoughts, desires and actions.
The death of the first-formed, due to their distancing from God, was followed by their descendants. Spiritual death (the inclination of the soul towards evil) and physical death (the corruption of the body) are symptoms for all of humanity. After the common resurrection and judgement, sin and death will eventually be eliminated. The Apostle Paul writes: "The last enemy to be destroyed is death" (1 Cor. 15:26).
Source: The Questions of Youth, vol. 1. Translated by John Sanidopoulos.
John at 9:13:00 AM
Share
‹
›
Home
View web version