Nun Barsanuphia and the Pouch with Thousands of Names 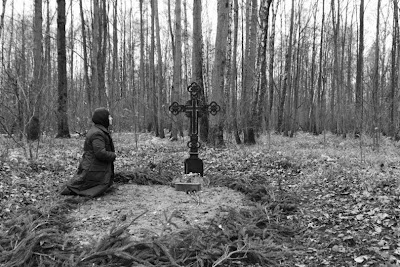 By Nina Pavlova
In Optina Monastery there lived a nun of almost ninety years in age. Her name was Barsanuphia and she wandered with a staff in her hand from one monastery to another.
All of her belongings were contained in two pouches which she carried with her. In one pouch there were some dried pieces of bread, while in the other there were papers with names on them for their commemoration that were mostly old and worn.
This pilgrim would come to Optina usually at night and with her staff she would knock on the window, saying: "Let me stay the night!"
Some would allow her while others did not, knowing that she was accustomed to not sleep at night, but rather she prayed on her knees throughout the night. It would not have been a problem if she did not just simply sleep, but at around midnight she would awaken all those who were sleeping, saying: "Why do you sleep, you slumberer? Think of the Last Judgement and wake up to pray!" We should note that she insisted on this very much until everyone got up, which is why often at daybreak one would find her in the stable or in any warehouse, together with her precious belongings. She valued very much her pouches rather than the warm clothes given to her, which sometimes she would abandon.
Nun Barsanuphia was a virgin and became a nun at a very young age. No one knows why she wandered, though it was not because she lacked shelter.
Previously she would come rarely to Optina and only in her old age did she settle there. The years had begun to weigh on her and the wanderings had decreased, while during the services she would sit in the stalls. Of course she not only sat during the services, but would come to church from 5:30 AM. She would remove the papers from her sack and all day she would sit and pray while commemorating the names. She would not go to the dining room of the Monastery to eat, since she did not care to eat. If you served her something, she would fake chewing it, otherwise she would take out a dry piece of bread from her pouch, bite on it a bit, and the rest she would save very carefully...
Before she died she begged those who came to see her to take the pouch with the names, so that after she died they would continue commemorating the names. "This is a great Christian virtue, to commemorate the names of the dead!" she would say humbly while looking into the eyes of each person individually with hope.
But everyone would look elsewhere, and nobody undertook to take this pouch with the names of the reposed that weighed at least ten to fifteen kilos.
It is said that Nun Barsanuphia knew all the names by heart. She had a very good memory. See how I knew this: After the death of my mother, I would distribute to the churches various fruits and sweets for her forgiveness. When I saw Nun Barsanuphia in a corner praying, I had already distributed them all. But I found two small tomatoes in my purse. I gave her one and begged her to pray for the soul of the reposed servant of God Anastasia. Five years later while I was outside the church, she called out to me and said: "I commemorate your mother Anastasia always!"
I remember another story related to the cemetery of the city of Kozelsk. During the years of persecution the Monastery was closed, while they buried the Optina monks and nuns in Samordino Monastery, but no one knew their names. Records were not preserved, while the inscriptions on the graves faded over time. The hieromonks of Optina often did memorials here, commemorating the departed in this way: "Lord, you know their names."
One autumn day they came to the cemetery for a memorial. The golden yellow autumn leaves of the maple trees covered the graves and along the narrow streets there formed piles of leaves. From one pile there suddenly popped out Nun Barsanuphia, who was very happy. "Sister Barsanuphia, what are you doing there?" everyone asked with surprise. "Did you spend the night in the cemetery?"
"The dead love me," the nun responded, and she immediately led the brothers to the cemetery saying who and where each person was buried!
Hence the monastics of Optina would often come to the cemetery to make inscriptions on the graves under the guidance of the nun. At the same time she would narrate their courage as confessors who suffered for Christ during the time of persecution. She remembered everyone, knew everyone, loved everyone, and prayed all night for them. Rarely did anyone ever see her sleep.
"Sister Barsanuphia," we asked her, "how do you endure without sleep?"
"The dead help me," she would joyfully respond.
... Now in the memorials of Optina they commemorate Nun Barsanuphia.
This nun loved everyone, but especially the reposed, even more than the living. They seemed more interesting to her, since THERE everywhere is TRUTH. On earth the soul feels crammed in vanity and in the worries and cares for the perishable and passing. This is perhaps why she wandered all her life, away from the cares of the perishable, forgetting the needs of life just as an adult forgets childish games.
The faith of Nun Barsanuphia was simple. She explained to us how we during memorials only ask for the reposed to pray for us to God. These are not empty words, but reality. They pray for us, they remember us and they love us. All earthly things will perish, while all that will remain will be love.
Source: From the book михайлов день (The Day of the Archangel Michael). Translated by John Sanidopoulos from the Greek.