The Miraculous Icon of Saint Anna in Bistrita Monastery 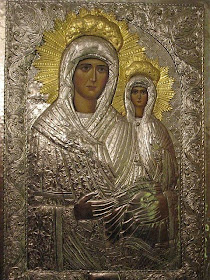 The icon of Saint Anna was donated by Roman Emperor Manuel II Palaiologos (1350 - 1425) and his wife Anna to Voivode Alexander the Good of Moldavia, in gratitude for the hospitality he gave to his son Andronikos while in Moldavia.
This icon has performed many miracles.
The icon of Saint Anna helped Voivode Peter Rares escape from falling into the hands of the Turks and inevitable death. According to the Chronicles of the Land of Moldavia by Grigore Ureche, the Voivode hid in Bistrita Monastery on September 17, 1538. His betrayers and the Turks of Suleiman tried to hunt him down. The Voivode prayed all night on his knees before the icon of Saint Anna with the fathers of the Monastery, and while weeping he promised Saint Anna that if she saved him he would fix the Monastery.
The Turks surrounded the Monastery. At dawn the next day he took courage from God and was able to escape from a secluded door, and dressed as a peasant he walked passed the Turks. With the help of Saint Anna they could not recognize him. Three years later, in 1541, Peter Rares again became Voivode of Moldavia and fulfilled his promise to Saint Anna.
Another miracle is recorded in 1853 and mentions that the abbot of Pangarati Monastery, Barnabas, was very sick and asked his monks to take him to Bistrita Monastery before the icon of Saint Anna. The miracle happened and out of gratitude the abbot Barnabas donated the carved and gilded icon screen which exists still there today.
Source: Translated by John Sanidopoulos. 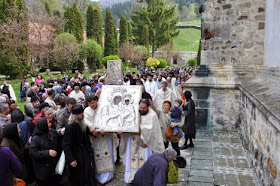 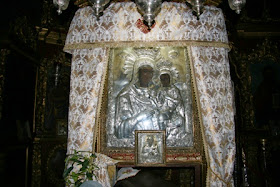