Abba Isaac the Syrian, the "Unjustly Accused" Saint (2 of 7) 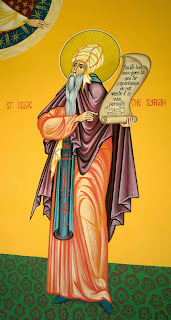 ...continued from part one.
2. What the Holy Fathers Say About Abba Isaac
Despite the lack of a day for commemorating this Saint and many others, the Church accepts them as authentic in Christ, their Life as in the Holy Spirit, their teachings as a distillation of their experience of theosis, of their "sensation in God" as Abba Isaac writes.
All these things are eminently applicable to the highest degree in the person of Saint Isaac. All of the ascetic fathers after him refer to him as Saint Isaac, as a true teacher of the ascetic life, as an experienced fighter and trainer in the war against the devil and the passions, as a spiritual litmus test by which is tested the experiences of those who fight as to whether something is of God or of the devil. Saint Peter of Damascus (12th cent.) refers to him 29 times! in his works that are contained in the Philokalia. He is also referred to by Saint Nikephoros the Monk, the teacher of Saint Gregory Palamas, in his "Discourse on the Watchfulness of the Heart"; by Saint Gregory of Sinai, who recommends to hesychasts the study of the Ascetic Discourses of Saint Isaac and places him together with Saint John of the Ladder and Saint Maximus the Confessor; and by Saints Kallistos and Ignatios Xanthopoulos (26 references). He is called by Saint Kallistos of Kataphygi "the uttermost educator of quietude".
Saint Gregory Palamas writes: "Saint Isaac calls illumination the fruit of prayer...", and he calls him an "inspector and author of secret inspections".
In the Life of Saint Savvas of Vatopaidi written by his biographer Saint Philotheos, Saint Isaac is referred to as "the experienced and learned Syrian that was notorious in hesychasm and theoria".
The great Russian hesychast, Saint Nilus Sorsky (1433-1508), refers to our Saint 37 times in his ascetic works.
Saint Nikodemos the Hagiorite calls him "our God-bearing philosopher Saint Isaac".
Saint Justin Popovich writes: "Among these holy philosophers, one of those who holds the first place is the great ascetic and saint Isaac the Syrian. In his writings Saint Isaac, with rare empirical knowledge, observes and describes the procedure for the healing and purification of the human faculty of knowledge."
Elder Joseph the Hesychast would say: "If all the writings of the desert fathers which teach us concerning watchfulness and prayer were lost and the writings of Abba Isaac the Syrian alone survived, they would suffice to teach one from the beginning to end concerning the life of stillness and prayer. They are the Alpha and Omega of the life of watchfulness and interior prayer, and alone suffice to guide one from his first steps to perfection."
Elder Ieronymos of Aegina would say: "Isaac the Syrian hides a great treasure. Open him, read him, be enriched spiritually... If you do not have Isaac the Syrian, and you don't have the money to buy him, grab a bag and go out to beg for the money to buy him... When you read him you rejoice and you are rebuked... Forsake not Isaac. Every day one page of Abba Isaac. Not more. Isaac is the mirror. There you will behold yourself. The mirror is so that we may see if we have any shortcomings, any smudge on our face, in order to remove it, to cleanse ourselves. If there is a smudge on your face or on your eyes, in the mirror you will detect it and will remove it. In Abba Isaac you will behold your thoughts, what they are thinking. Your feet, where they are going. Your eyes, if they have light and see. There you will find many sure and unerring ways, in order to be helped. One page of Isaac a day. In the morning or at night, whatever. Suffice it that you read a page."
Elder Paisios would say: "If anyone went to a psychiatric hospital and read to the patients Abba Isaac, all those who believed in God would get well, because they would recognize the deeper meaning of life." In his Epistles the Elder wrote: "The study of the Ascetic Discourses of Abba Isaac helps very much, because it helps someone understand more deeply the meaning of life and every small or large complex, and everyone who believes in God that has these it will help them to remove them." At the end of the Life of the Elder we read: "He would say that the book of Abba Isaac is worth a whole patristic library. In the book [Ascetic Discourses] he read, while beneath an icon of the Saint, in which he holds a feather pen while writing, he inserted the note: 'My Abba, give me your pen to underline your entire book.'"
Elder Porphyrios would say: "Indeed, in regards the mysteries God reveals within us, silence is the best. Yet, what happened with the Apostle Paul could happen to us, where he says: 'I lost control; you forced me to say things out of love.' Abba Isaac was saddened over the same thing, where he was forced to speak of the mysteries and the profound experiences of his heart, but fueled by love alone, see what he says: 'I became foolish; I have not suffered to preserve the mystery in silence, but I became a fool for the benefit of the brethren.'"
From all these testimonies of the Holy Fathers and modern Elders the universal acceptance of the holiness of Abba Isaac becomes apparent, as well as the holiness of his writings, his Orthodoxy, and the authenticity of his experiences in the Holy Spirit.
Translated by John Sanidopoulos.
PART THREE
John at 1:52:00 PM
Share
‹
›
Home
View web version