Abba Isaac the Syrian, the "Unjustly Accused" Saint (1 of 7) 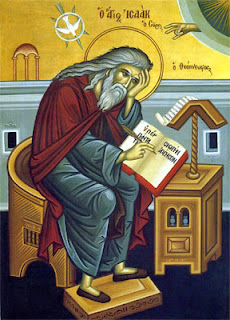 By Protopresbyter Fr. John Photopoulos
This paper has been prompted by the book The Spiritual World of Isaac the Syrian by the bishop Hilarion Alfeyev, as well as by the three volume editon of the writings of Pseudo-Isaac published by the Sacred Monastery of the Prophet Elias in Thera titled The Ascetic Discourses of Saint Isaac the Syrian: A Translation from the Syriac. After this article there follows a letter by the author to the Abbot of the Sacred Monastery of the Prophet Elias in Thera on the issue of the cacodox writings of Pseudo-Isaac.
1. Introduction - Abba Isaac the Syrian
The complete and utter lack of uncreated Grace in the West and the consequent rationalization of theologians has created for it a mess, a confusion for all "Christians" in the West. Very many people who were seriously concerned for the faith and the Christian life were inoculated with persistent doubts in relation to the Gospel, its truth and authenticity, to the correct faith, to the authenticity of patristic texts and even concerning the existence of certain saints.
Unfortunately this terrible confusion that was brought to Orthodox lands through books, periodicals, programs, conferences and committees have poisoned with small, careful doses the Orthodox consciousness. They sow hesitation in regards to the full and absolute truth of Orthodoxy and they use a supposed dialogue that aims at reconciling Orthodoxy with error, Orthodoxy with religions, always according to the dictates of the New Age.

The book by the Russian bishop of Vienna Hilarion Alfeyev, The Spiritual World of Isaac the Syrian, serves this purpose.

Before we talk about the book by Alfeyev we should say who Abba Isaac the Syrian is. He was born in Nineveh, or according to others near Edessa of Mesopotamia. Because there is a letter of his that is addressed to then young in age Saint Symeon of the Wondrous Mountain (521-596), it is assumed that Saint Isaac was "in full bloom" at around 530 A.D. and probably reposed at the end of the sixth century. At a young age he became a monk with his brother at the Monastery of Saint Matthew and later he fell in love with quietude and withdrew into the desert. When his brother became Abbot of the Monastery of Saint Matthew he invited him to return to the Monastery, but having now experienced quietude he refused this request. Later, however, he obeyed a divine revelation and agreed to become the bishop of Nineveh, though for a short time. The day he was ordained bishop two people came to his diocese to solve a dispute between them. When the Saint set the Gospel as the basis for the solution to their problem, one of them refused. The Saint then thought: "If they are not obedient to the gospel commands of the Lord, then why did I come here?" He thus abandoned the episcopal throne and returned to his beloved skete, where he lived and struggled until his death.

But if the detailed life of Abba Isaac is not known, the Saint is well known through his Ascetic Discourses. In the eighth of later ninth century two monks from the Monastery of Saint Savvas in Palestine, Abramios and Patrikios, discovered the heavenly treasure of the Discourses of the Saint and translated them from Syriac to ancient Greek. This treasure spread everywhere through translations into the Arabic, Slavonic and Latin languages, and then into every European language.

Thus the works of Venerable Isaac became the delight, spiritual food and consolation of hesychasts, monks and all the faithful. He emerged as an ecumenical teacher of the life in Christ. Even the heterodox with the translations in their own languages were captivated by his teachings and studied them with thirst.

Despite this, only in recent years has the feast for his commemoration been established. In the olden days on Mount Athos he was honored on January 28th together with Saint Ephraim, while lately it is done on September 28th. But does this delay of the celebration of his commemoration plague his sanctity or glory? Perhaps Abba Isaac is not a Saint? From the outset we must say that there are many Saints who are not referred to as Saints in Patristic books and do not have an established commemoration or, as was done with Saint Isaac the Syrian, their commemoration was not established until recently. You will search in vain for the commemoration day of Venerable Theognostos whose writings are in the Philokalia, while the commemorations of Saint Diadochos of Photike, Hesychios the Presbyter, Saint John of Karpathos who wrote "For the Encouragement of the Monks in India", Saint Nicholas Kabasilas and Saint Symeon of Thessaloniki were established in recent years.