The Wives of Priests as Heroic Women 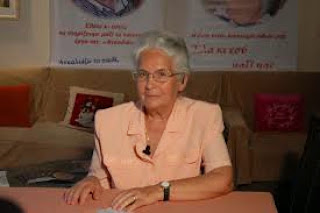 On March 8th, which is International Women's Day in the United Nations, Presvytera Barbara Metallinos spoke about the role of women and especially the role of the wife of a priest in contemporary society. Presvytera Barbara, a theologian and scholar in her own right, is the wife of the distinguished scholar Protopresbyter Fr. George Metallinos, and is President of the Association of the Unborn Child "The Embrace" in Athens. For half a century she has stood by the side of her husband and has much wise advice for women today who decide to become heroic women as wives of priests.
Below are a few excerpts from her lecture:
The Presvytera in the Parish
"The woman, we should not forget, is also blessed by God, and has received motherhood as her primary task and mission, without this making it difficult for her to set her sights on the order of the community, either as a mother (with higher sensitivity) and especially as a presvytera (with her big family called a parish) where she will be able to cover, comfort and embrace acting as a woman, showing sensitivity and love for others. As a presvytera, there naturally opens up other areas where she can move around, vigorously participating in parish life and divine worship. In many villages and remote islands especially, the presvytera may even replace the chanter since none exist. Of course her main task is, if she has young children, the church in the home, but if she is a hard worker and has concern to make a common offering to the parish, other horizons open up for her."
The Presvytera and Feminism
"To serve is not something that reduces a woman, but it is her nature. This does not mean she is a servant. The reality is that feminism is disoriented, as we experienced in the 1980's and 1990's. It was not genuine because the majority of women divorced, since they would go on vacations and entertain themselves alone. Instead, nature herself calls a man and a woman to struggle and make an effort together. Genuine feminism is for a woman to show herself in that which she predominantly predominates, i.e. in her approach to other people, in her love and in her motherhood. Feminism has relinquished womanhood, and denied motherhood, and they have become like reeds in the valley, with the result that they seek after fifty to bear children through artificial insemination."
Advice to Young Couples Regarding Divorce
Divorce has come to 'serve' as a suitable and ideal solution to domestic problems. They have not come to believe in marriage, but they take it to be superficial. Without a doubt it is a matter of the ego. The man might believe: "I am a man, what I say should be done", and on the other hand a woman, thinking that she is considered as inferior reacts to the slightest without talking to one another and without the tolerance needed for each other in one anothers difficult moments. Let us not forget that at the time of the Mystery of Marriage it is said that a man must sacrifice for his woman, like Christ sacrificed for the Church. Usually, of course, we all live by the phrase: 'And the woman should respect her husband.' But this is the bare minimum."
Source: Translated by John Sanidopoulos.