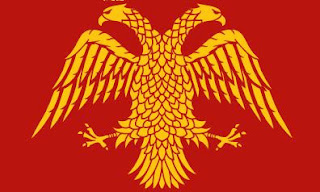 By Protopresbyter Fr. George Dragas
Today's Orthodox Church is the true heir of Romiosini, as long as and in so far as it remains one indivisible and transnational communion and constitutes a living presence in the ambient reality of the contemporary world.
My great teacher, Fr. George Florovsky, a Russian by national origin, would emphasize in his lectures: "As Orthodox Christians we are all Greeks. Not simply Greeks in the ancient, classical sense, but as Greek Orthodox, i.e. the Hellenism baptized by the Apostles and Fathers to Christ, in the name of the Father, the Son and the Holy Spirit, and which became the ecumenical basis of the One, Holy, Catholic and Apostolic Church, which included many peoples and 'empowers' the entire world." He meant, of course, Greek Orthodox Romiosini.
In one of his lessons at Princeton University, the wise teacher said with extreme seriousness the following: "If Russians and Americans do not become Greeks, neither will they be saved, nor the world!" And addressing me, he added: "You know what I mean; I mean if they don't become Greek Orthodox Christians."
Today in the Diaspora there is a big discussion in theological circles around what Florovsky meant, when he spoke of the contemporary need for a "neopatristic synthesis". Your Beatitude, Holy Hierarchs, Priests and Greek Orthodox Brethren, I believe that the "neopatristic synthesis" of the ever-memorable Father Florovsky refers to the spiritual/cultural reorganization of the enlarged Greek Orthodox Romiosini, which must continue to be transnational and ecumenical and include all Orthodox people and the Orthodox Diaspora scattered throughout the entire world. The basis of this enlarged Romiosini must continue to be the Orthodox Church of historical Romiosini, the Senior and Ancient Patriarchates of the One, Holy, Catholic and Apostolic Church and Her common Orthodox inheritance. Besides, this is the challenge of the Holy and Great Pan-Orthodox Synod, whose preparation is returning once again to the historical scene.
Source: Excerpt from the lecture titled "Ρωμηοσύνη, Ἀπόδημος Ἑλληνισμός, Πρεσβυγενῆ Πατριαρχεῖα" ("Romiosini, Hellenism Abroad, Senior Patriarchates") in Athens in May 2009. Translation by John Sanidopoulos.
John at 5:06:00 PM
Share
‹
›
Home
View web version