The Venerable Old Man Panais (1 of 5) 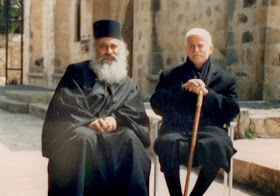 By Archimandrite Gabriel,
Abbot of the Sacred Monastery of the Holy Apostle Barnabas
Old Man Panais, as I knew him from my youth, sixty years ago, lived passionately in love with God at a time when religious sentiment was low and indifferent. He found God together with his brother Vasili, praying and studying the few books they could find at the time, especially the pamphlets of the Zoe Brotherhood. He was not affected by this, because he had a Christian upbringing from his parents, who led them to the Church and philanthropy.
He knew about the concentration of the nous in prayer and how understanding what one is saying is everything, which exalts man and illuminates him. For this reason he replied with a parable to a question on how to concentrate the nous. The nous, he said, is like a colt which, if you do not tie it to a pole, you cannot gather it easily. With this parable he meant noetic commitment to prayer. His fervent prayer was shown with the devotion he had, chanting or reading the prayers and especially the Six Psalms of Matins, with passion and awe, making them a request of his very own soul.
The Church was his school, the bastion of his soul, and his love for the Panagia especially, whom he served with passion, was something extraordinary. There he found the opportunity to study ecclesiastical texts and give spiritual counsel to pained souls that thirsted for the word of God and for consolation. For every soul runs to the Church when they are in pain and facing difficulties in life. This was very much exemplified by his presence in the homes of the sick and those near death, as everyone would expect Old Man Panais, who was then a young man, to hear his words and counsels which they would accept without question as if it was God's voice. With his humble presence he would give a message of the love of God in his village, in Lysi, where he developed a religious community.
In works of love he would act secretly, giving according to the Gospel teaching "not letting your left hand know what your right hand is doing". His faith was without doubts, considering God as a Father, who would not give His child a snake instead of a fish or a stone instead of bread.
He had three conditions - that we have and ask from God our Father to give us living faith, certain hope and active love. These were his three requests, and as a fourth he included the gift of discernment, that we may know what gives structure to what we are saying and doing. The way of life of Old Man Panais was to struggle, to seek communion with God, to pray and to glorify God. He lived in celibacy according to Christ and lived it ascetically, having as a model his mentor and spiritual father the most-ascetic Father Cyprian of the Sacred Monastery of Stavrovouni.
Father Cyprian knew the holiness of Old Man Panais through the discernment that possessed his soul and gave him his blessing to live in the world catechizing the faithful without monastic garb, but simply as a man of the world, that he may build up souls. This was his wish and command up until the eve of his death, when he was visited. Night and day he devoted to prayers on his knees, especially when he was by himself, with extraordinary contrition, because he believed that man can find God with contrite prayer. When he read or chanted, he spoke with God, expressing his own desires with the words of the hymns, especially the Six Psalms, and oftentimes broke his soul in contrition pleading in a rare style that elevated you in feeling the love of God.
What can one say about the love that possessed him. He ran everywhere as an inconspicuous ordinary friend, father and brother, to give consolation to pained souls, to widows and to the sick. His words and example were a light and life, a support for troubled souls and often respected by the indifferent and unfaithful. He lived and spoke what was said by the Apostle Paul: "Who is weak, and I do not feel weak? Who is led into sin, and I do not inwardly burn?" (2 Cor. 11:29).
Source: Translated by John Sanidopoulos.
PART TWO
John at 12:05:00 PM
Share
‹
›
Home
View web version