The Byzantine Origins of the Christmas Tree 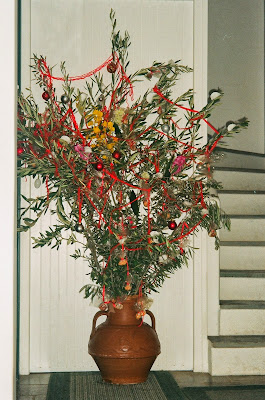 By John Sanidopoulos
The idea behind the Christmas tree and its decoration, does not have Northwest European roots, as many believe. In fact there was a similar ancient custom that began with the Greeks and adopted by the Romans of the East. Evidence suggests that this is the origin of the custom of the Christmas tree as we know it today.
While today we know a Christmas tree to be usually an evergreen conifer such as spruce, pine or fir, in ancient Greece it was something called "Eiresioni" (είρος = wool). Eiresioni was an olive branch or laurel decorated with garlands of red and white wool as well as early winter fruits (figs, walnuts, almonds, chestnuts, grains, etc. besides apples and pears). This was done as an expression of thanksgiving for the harvest and fertility of the past year and so that it would continue into the next. Usually they were dedicated to a pagan god such as Apollo, Athena, or the Horae (Eunomia, Diké, and Eirene).
Homer mentions the ancient Greek custom of Eiresioni, which he associated with caroling children. In Samos he put together several songs which a group of children would sing in the homes of the wealthy wishing them continued wealth, joy and peace. This was celebrated twice a year, once in spring in order for the people to request from the gods, especially from Apollo, sun and the seasons to protect the seed, and once in autumn, to thank the gods for the good harvesting of their fruits. Along with their thanks to the gods, they gave good wishes to their fellow brethren also.
During the period of September 22 - October 20 children would go from house to house, holding the Eirosioni, singing carols and receiving gifts from those pleased by their performance. Many of the children would bring home the laurel and olive twigs and hang them on their doors where they stayed the whole year (something which some Greeks still do to this day). The Eirosioni of the previous year would be taken down and burned. The entrance to the Temple of Apollo also had Eirosioni.
This is a traditional Eiresioni carol from the Homeric period:

To this house we came of the rich-landlord
May its doors open for the wealth to roll in
That wealth and happiness and desired peace should enter
And may its clay jugs fill with honey, wine and oil
And the kneading tub with rising dough. 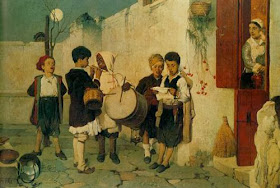 The Christmas Tree in Byzantium
The ancient custom of Eirosioni was not forbidden in Byzantium, but it was Christianized to be a way to thank God for all the goods He provided. In fact, this custom was usually encouraged, as the ruler of each local city would order the local streets be cleaned and decorated at certain intervals with poles of rosemary, myrtle branches and blossoms of the season.1
The custom of decorating a pole with rosemary still survives in the memory of the Greek people, when they sing one of the most popular carols for the New Year: Αρχιμηνιά κι αρχιχρονιά ψηλή μου δενδρολιβανιά (Beginning of the Month and Beginning of the Year oh my dear tall Rosemary).
It is believed that the custom of Eirosioni together with the later custom of decorating the streets with poles of rosemary travelled to Northwest Europe, though there they adorned the trees and branches that were local to them, which are the evergreens we know today.
This transfer of customs may have been done by the Royal Cavalcade Battalion, who were the palace guards of Byzantium. Among others they played a ritual role in official imperial ceremonies - including that of Christmas. They were divided into three companies - the Small, the Medium and the Great Company. The Small Company consisted of those who were of another religion (eg. Pagans, Muslims, etc.), the Medium Company consisted of the heterodox and foreign Christians (eg. Scandinavians, Germans, Russians, British, etc.), and the Great Company consisted of Orthodox Christian Romans. Perhaps it was the foreigners among them who brought these Roman customs of Byzantium to their respective countries. 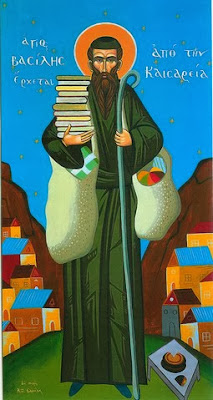 Other Customs
Though the ancient Greek custom of Eirosioni and the Roman/Byzantine custom of the pole of rosemary may have transferred to places in Europe that later became associated with what we know as Christmas trees, wreaths, caroling and gift-giving, there are other customs that may have their origins in Byzantium as well.
For example, the Romans of Byzantium on the day of Christmas would make a small cave and place in there an image of Jesus, which was an early form of a manger scene.2 Also, the Roman children in the 12th century are said to have gone door to door caroling for the New Year in January, as well as on Christmas and on Epiphany day.
There may be indications as well that the tradition of Santa Claus, associated with Saint Nicholas in the West, may have actually originally been Saint Basil the Great (Agios Vasilis), whom Greeks today still celebrate on January 1st and for children is associated with going from house to house distributing gifts. This is why among Greeks today the exchange of gifts is usually reserved for January 1st.

Nowadays, Greek children sing the Carols (Kalanda)3 during the morning of the eve of Christmas, New Years and Epiphany, by visiting the houses as early as 5:00 o’clock in the morning. Whereas in the past the children were holding a small effigy of a ship when they were caroling, now they usually are holding a small steel triangle, which they are beating rhythmically so those singing carols will keep the pace. During the ancient Greek feast of “Anthestiria”, the arrival of the god Dionysius was portrayed by an effigy of a small ship, and so it possibly could have come to signify the arrival of Jesus. In the not so distant past, during the times of great poverty, since money was scarce, the most common gift to the children were "Kolintra", that is small loaves of wheat or barley.

In modern Greece the custom of the western Christmas tree was introduced by the Bavarians who decorated the palace of King Otto in 1833. After the Second World War the tree with colorful balls became fashionable in all Greek homes.
1. Phaedon Koukoules, assistant professor University of Athens, Byzantine Life and Civilization (Βυζαντινών Βίος και Πολιτισμός), p. 152.
2. Ibid. p. 151.
3. Carol: Derived from the Latin choraules, which is derived from the Greek choraules, “a flute player who accompanied the choral dance.”
John at 10:07:00 AM
Share
‹
›
Home
View web version