Have You Prepared Your Manger? 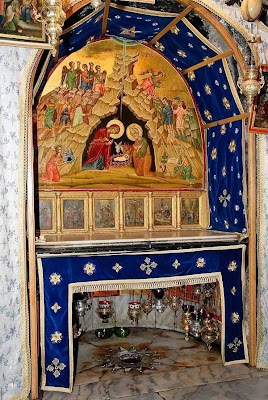 By Fr. Cherubim Veletza
Have you ever wondered, why did Christ choose to be born in a cave and be placed, after His incarnation, in a manger?
Why wasn't He born in a house, even if it was poor and humble?
God as man in the person of Christ came and lived on earth humbly and undetected. But what need did His particular mode of birth serve? For, if He was born in a house, He would still be undetected and still humble.
There was no place worse than a cave and a manger, for the newborn Messiah to see the light of day, or the shimmer of the stars.
For any common man it would be a shame to be born in a stable, let alone God Himself.
Yet this is exactly what the Lord wanted to emphasize from the beginning: that although He was God, He humbled Himself and took on a human hypostasis, and this divine humbling is much greater than simply a man being born inside a cold stable.
He chose to be born in a cave and not a normal stable, to show that God does not dwell in temples made with hands, but in the hearts of those who recognize their unworthiness to receive Him and live humbly, without boasting and self-promotion.
He chose to be placed in a manger of irrational animals, to show us that He came to dwell in this irrational world, a world that was dominated (and unfortunately still dominated) by sin and unbelief, which is foolishness in God's eyes.
Amid the hubbub of the census, accommodation for the newborn Christ could not be found, except in the embrace of the straw manger of irrational animals.
And in the maelstrom of sin and hypocrisy He was not accepted by His chosen people, except for the few humbled and crushed hearts of simple fishermen, tax collectors and prostitutes, who had the straw of humility and embraced Him as Master and Savior.
He chose for all these things to take place in this way, so that with the visit from the Magi it would not be obvious who the King was.
These distant visitors bypassed the person of Herod and every earthly glory and dignity and, these wise men according to the world, came to offer their gifts to Him Who deserves all glory and honor and worship, the obscure infant, the pre-eternal God.
In the modern hubbub, in the dizziness of the preparation of various dishes and sweets, in the irrationality of worldly events, He will again remain outside of human activities.
He will look again for some dark cave of self-knowledge, which has a manger of humility with a little straw of genuine love, and there He will rest in the hearts of certain people who will live once again this year in the great Mystery of the Divine Incarnation, and they will secretly chant, along with the Angels, the "Glory to God in the Highest...".
For two thousand years He is doing exactly the same thing, every day and every hour:
He is looking for a Manger!
When He locates it, He will remain there, and He is saddened when He sees that He is absent.
For several years, this is my anxiety, that is, if I have the required humility for a manger in the cave of my heart, and if I have adorned it enough with the straw of true humility.
Really, have you prepared your Manger?
(Distributed in December 2000)
Source: Translated by John Sanidopoulos.