The Angel of Great Counsel in Iconography 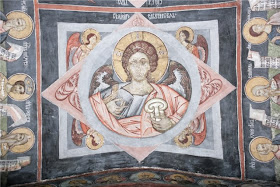 "For unto us a child is born, unto us a son is given, and the government will be on his shoulders. And he will be called Angel of Great Counsel, Mighty God, Everlasting Father, Prince of Peace. Of the greatness of his government and peace there will be no end. He will reign on David’s throne and over his kingdom, establishing and upholding it with justice and righteousness from that time on and forever. The zeal of the Lord Almighty will accomplish this." - Isaiah 9:6-7 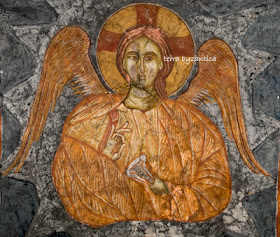 The Fathers of the Church, such as Athanasius the Great, responded to the Arians in their writings, who claimed that in the Old Testament there was no vision of God, rather what the Prophets saw was the created Word of God. The Fathers wrote that the Word (Logos) of God revealed to the Prophets in the Old Testament as the Angel of Great Counsel, was indeed the uncreated Word of God. Thus the debate between the Arians and the Orthodox was whether or not the Angel of Great Counsel revealed to the Prophets in the Old Testament was created or uncreated. The Arians argued he was created, while the Orthodox said he was uncreated. The answer to this question would reveal whether or not the Word of God was consubstantial with the Father, and thus God. If the Angel of Great Counsel is indeed the uncreated Word of God, then the Prophets had a vision of God. The Fathers of the Church, who experienced the vision of God, knew that the Word of God shared the same glory by nature with the Father, while the Arians, who did not have an experience of God but rather philosophized about God, did not come to this understanding. Thus when we say that the Word of God is consubstantial with the Father, it means He is uncreated and shares in the same glory as the Father. Athanasius the Great drew from his experience of the glory of God, and argued his position from both the Old and New Testaments.
Source
John at 2:42:00 PM
Share
‹
›
Home
View web version